This is a true story about not only bravery, but the importance of preparation and practice. It involves the destruction of a dam in Germany in World War II.

The Mohne Reservoir was an artificial lake in the North Rine area. The dam had been 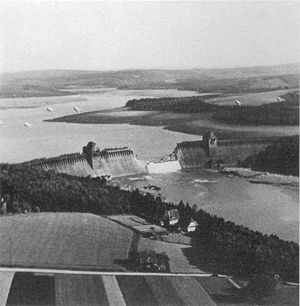 built in  the early 1900's to control flooding and generate hydropower. Also on this waterway were two other dams, the Sorpe and Eder dams. During World War II the British Air Ministry identified the heavily industrialised Ruhr Valley and these dams as important strategic targets. They supplied hydroelectric power, drinking water and controlled flooding in the valley. Military factories in the valley were dependent upon these dams operating.

The British decided to destroy all three dams in a bombing raid. The plan was called Operation Chastise. The bombers used were Lancaster planes, the most famous British bombers used in German raids in World War II. The 617 Squadron, consisting of the nineteen bombers who made the attack, was afterwards known as the "Dambusters."

The first wave of planes, led by Wing Commander Guy Gibson, would attack the Mohne dam. The second group was to hit th Sorpe dam and the third group would take off two hours later for its raid for its bombing run.

However, this would be a bombing raid that required precision flying. Special "bouncing" bombs had been designed. The bombs had to avoid the protective netting 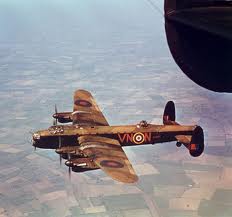 that hung in the water. To do this the bombs had to be dropped from only 60 feet and skip into the dam face, then rolling down it into the water until they reached the depth set by a pressure fuse in order to blow up under water along the dam face. To do this, the aircraft would have to drop to 2,000 feet over German guns firing at them from the ground, fly exactly 240 mph and exactly be 60' above the water to accomplish this. On top of that it had to be done at night. To prepare for this raid, two months of of night and day practice was required. No fewer then 2500 practice bombs were dropped in the training phase. The planes practiced this procedure over and over until they were ready to make the bombing run.

The first group of bombers led by Gibson arrived safely at the Mohne dam and Gibson dropped his bomb, but failed to land correctly. Gibson then flew across the dam to draw fire from the ground guns and away from the other aircraft which were successful in dropping their bombs. When the bombs went off a huge column of water rose and a shock wave went through the lake. A breach in the dam was created and a torrent of water was released down river causing massive damage.

Attacks against the other dams were not successful, but the damage to the Mohne dam resulted in destroying eleven factories, disruption of power, water and gas supplies and killing people. For a time the Rhur valley was out of commission and the German war effort stopped.

Gibson and the surviving planes then headed home to England. On the way back one plane was shot down close to the German Dutch border and another was hit, crashing into the sea.Other planes were shot down. Only eleven of Gibson's nineteen bombers survived. Fifty three airman died and three were captured and spent the war in prison camps.

Gibson made it home safely and was awarded the Victoria Cross for his role. After a short time the use of this bomb was discontinued because of the high mortality rate because of the requirement to fly so low to the ground. Practice and preparation, though, paid off in this bombing raid for the British and their flying crews.