I think many of us have stereotyped someone and formed conclusions that proved to be very mistaken. We are often fooled by appearances. The proverb that you can't judge a book by a cover is very true in life. Scripture scholar William Barclay illustrates this 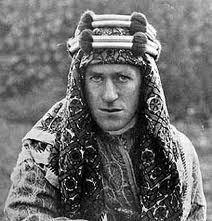 fact by telling a story involving the famous T.E. Lawrence. Lawrence, of course, gained international fame for his role in the 1916-1918 Arab revolt against the Ottoman rule. His writings and reports as well as books about him made him world famous at the time. Even a  movie was made of his life.

As Barclay tells the story, Lawrence was serving as an ordinary aircraftman in the Royal Air Force. He was a close friend of the poet Thomas Hardy and would often visit Hardy's home. One day he arrived during a visit of the Mayoress of Dorchester and was invited to share tea. She, however, was very affronted about having tea with a common soldier and had no idea who he was. In French she said to Mrs. Hardy that was unhappy about sitting down with this soldier to share tea. No one said anything. After a pause, Lawrence said to her in perfect French: "I beg your pardon Madame, but can I be of any use as an interpreter? Mrs Hardy knows no French."

As Barclay says: "A snobbish and discourteous woman had made a shattering mistake because she judged by externals." I think we need to practice no judging by externals.

2 thoughts on “THE MISTAKE OF JUDGING OTHERS BY APPEARANCES”