Lita and I are finally back in Gig Harbor. While I am still getting antibiotic therapy for my knee and unable to drve, it's great to be home. This long neglected blog needs attention. We watched a wonderful film about a famous race horse which inspires this posting. I don't follow the races or go to the track, but there are champion horses worth hearing about.

A couple of famous horses have ties to Washington state. Real Quiet was the name of a racehorse Mike 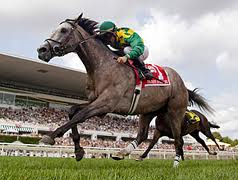 Pegram of Mount Vernon, Washington bought for $17,000. It took seven races before he won a race but then he began to improve and win more races and  finished with average earnings of $380,000 after two years. Entering the Kentucky Derby, in 1998, he won. Pegram and his horse were famous.   Following that he won the Peakness Stakes and was entered to run in the Belmont Stakes – the third leg of racing’s triple crown. Everyone had their eye on Real Quiet who had come out of  nowhere and had been bought for so little.. Howeverk Victory Gallop beat him by a nose in final stride of the race,

Seattle Slew won the United States Triple Crown of Thoroughbred racing in 1977. He was only the tenth of a eleven horses to accomplish it. The horse had been sold to a couple in White Swan, Washington and named after the city as well as the slough’s of the area.  But, on second thought, they decided to change the spelling to “slew.” The horse became famous amoung racing fans and did not disappoint his owners.

Man O’War was famous in horse racing in the 1920’s. He was voted the greatest thoroughbred of the first half of the twenty century.  He won  twenty of twenty one races and one by an incredible 100 lengths. He was the most famous horse of his time.

Seabiscut set records for four handicaps and was a favorite of American racing fans.  In his most famous race, the 1938 Pimlico Special,  he  beat War Admiral. A movie was made about the horse and the race in 2003 featuring Jeff Bridges and Tobey Maquire. The horse was a sensation because he didn’t look like a race horse at all and no one, except his owners, thought he could race. However, the horse was a competitior who never gave up.

In the 1950’s Citation was the horse of the time. He won eight out of nine of his first races. He went on to become the 8thAmerican Triple Crown champion in 1949. He won sixteen major stakes races in a  rown.

In the  1970’s Secretariat won eight victories in a row. He set a record in winning the Kentucky Derby and In 1973 he  won the Triple Crown at the Belmont Stakes by an amazing thirty one lengths setting a new world record there as well. A movie was made about the horse in 2010 featuring John Malkovich. The background is that the a mother agreed to take over her ailing father’s stables even though she had no real experience and with the help of a veteran trainer produces the first Triple Crown winner in twenty five years.