Dodds retired from  contracting work in 2000 and moved to the island. Dodds worked at the Coupeville liquor store.  He loved golfing and golf, but his true love was fishing. He had fished almost every other day 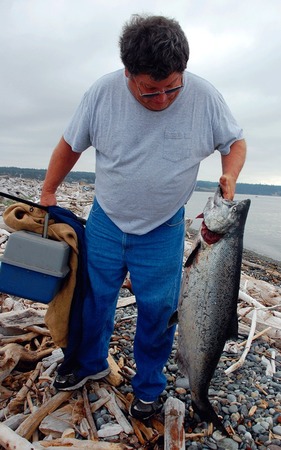 this season and  had yet to catch anything. He was fishing for pink salmon as they were coming through the area.  The usual size is three to five pounds.  Other  fisherman saw a beautiful sunrise that morning

All the sudden Dodds pole bent and he had a fish on.  The fish fOught  like crazy and Dodds followed it up and down the beach sometimes waist deep in water. After  twenty minutes he landed a  28 pound King or Chinook salmon. It was the biggest salmon he had ever caught  and he managed to land  it with light tackle on the beach.  He told a nearby fisherman “That’s the fish of my dreams.”  He was smiling from ear to ear.

Dodds  sat down on a stool when it was over and all the sudden fell forward face into the water. Other fisherman rushed  over and applied CPR.  An ambulance was called but Dan Dodds ws dead.

His friends held a memorial on the beach near where he died and after the speech’s they bargecued Doods  fish and celebrated his life. Life is unpredictable.

0 thoughts on “THE FISH OF HIS DREAMS”