I've written about this event before, but a recent book on the trench warfare of the first World War made me think about this again.

World War I began in July of 1914 involving primarily Germany, Russia, France & the United Kingdom. It wasn’t until April of 1917 that America entered the war against Germany. President Wilson had tried to keep America out of the war, but German submarine attacks sinking American ships caused America to 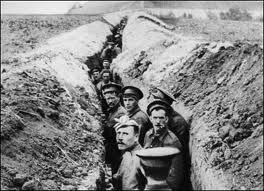 join the allies. The war didn’t end until November 1918. There were over 15 million deaths and 20 million wounded making it one of the deadliest conflicts in human history. For example, at the battle of Marnes allied forces suffered 263,000 casualties and the Germans 220,000. In the battle of Verdun the French lost some 542,000 casualties while the Germans lost 435,000.

The Western Front was the name Germany gave to trenches that ran from Belgium to the Swiss Alps, a distance of over 500 miles. Lines of trenches dug into the ground with thousands of soldiers facing each other in trench warfare with little or no change in attempts to advance.

The front line of ditches faced enemy ditches and between them was an area known as “no man’s land.” The area ranged from several hundred yards to as little as fifty feet in some areas. It was defended by both opposing sides with sniper fire, machine guns, mortars and artillery. It was lined with barb wire 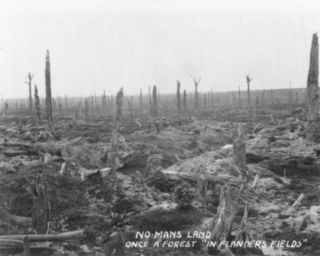 and obstacles. At night and at some location, patrols would be sent into no man’s land to repair fortifications or to try to listen for information. Sometimes patrols from both sides would meet and hand to hand fighting took place.

Life in the trenches was pure hell. The men were at risk of sniper fire if they exposed themselves. The Germans developed poison gas which caused a slow painful death. Daily bombardments and machine gun fire. The rain would change the trenches into mud. The constant gun fire and bombing created a mental stress and mental breakdown known as “shell shock.” There was rat infestation and lice that caused trench fever. There was a terrible stench in the trenches from the nearby unburied dead, lingering poison gas, stagnant mud and unwashed soldiers.

During the day on Christmas Eve 1914 the German’s could be heard singing and laughter. On occasion a German would yell out a Christmas greeting. Later the German’s began decorating their trenches with candles and erected Christmas trees. British soldiers were ordered not to fire, but to watch them closely for some kind of trick. The British began to sing Christmas songs as well. . Some would yell to come over
and see us and the other side would yell back, “no, you come to see us.” Soon there were experimental excursions into no man’s land to see what would happen. Within a short time some 100,000 soldiers were out of the trenches and into no man’s land.

Small gifts were exchanged. Wine and beer shared. Soldiers showing pictures of family and girlfriends to each other. The artillery and guns were silent and burial parties collected the dead. Joint Christmas singing took place along the miles of no man’s land. Officers who objected were ignored to the dismay of the officers. This amazing and unofficial truce lasted through Christmas day and night after which the shooting and killing resumed as before.

0 thoughts on “THE STRANGE TRUCE OF CHRISTMAS 1914”