Eric Hartmann was a German fighter pilot during World War II and was the highest scoring fighter ace in the history of aerial warfare. He flew in 1404 combat missions and engaged in aerial combat 825 times while serving as a fighter with the Luftwaffe. His record was 352 aerial victories involving shooting down an enemy aircraft. At the same time Hartman forced to crash land his fighter 14 times. However this was not due to being shot down or forced to land, but rather from mechanical failure or damage by being hit 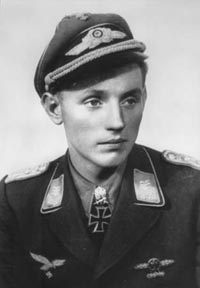 with parts from enemy aircraft he had shot down. He was known by several nicknames from his enemies including "the blonde knight" and "the black devil."

Hartman learn to fly when he joined a glider training program and was taught to fly by his mother ,who was one of the first female glider pilots Germany. He began his military training in 1940.  He made his first flight four days later and three weeks later his first solo flight. He completed his training in 1941. His credo was: "fly with your head, not with your muscles." He specialized in surprise attack which he called "see, decide, attack &  break .He would try to not reveal his position until the last moment. He said that one of the secrets to his success was: "to give the enemy target the full effect of my weapons. If you wait until the other plane fills the entire window of your cockpit, you don't waste a single round.

He was an expert marksman and the master of stalk and ambush tactics. He felt that 80% of the pilots he shot down did see him until it was too late. Sometimes he would dive through entire enemy formations and take advantage of confusion. His favorite method was to hold fire until very close to the other aircraft and use a short bursts at point blank  range.

Most of his victories involved aerial combat with the Soviets. In 1943 his aircraft was damaged by debris from another plane he had shot down and he was forced to land behind enemy lines. The Soviets captured him but he managed to escape by jumping out of the back of a truck. He found his way back   to the front and crossed over to the German side. It wasn't long before he was flying in combat again.  The Soviet command put a price of 10,000 rubles on his head.His plane had a black tulip design on the front, but he found that Soviet airmen who recognized who he was were reluctant to involve themselves in a fight with him so he removed and design in order to conceal his identity.

In 1944 Hartman was  involved in combat with American fighters. After shooting planes down, he ran out of fuel and was forced to bail out. He later described being in his parachute when one of the American planes headed straight for him. He was certain that he was about to be shot but at the last moment the plane turned, took a picture of him and the pilot waved at him as he flew away. Once again, Hartmann survived fly in combat again.

In 1945, Germany had lost the war and Hartman and his entire unit had to  surrendered to members of the United States infantry division. The Americans turned them over to the Soviets. As a prisoner, Hartman refused to cooperate. He went on hunger strikes and was such an uncooperative prisoner that he was put in solitary confinement. Finally, the Soviets  sentenced him to 25 years of hard labor and when he refused to work they put him into solitary confinement for five months. it wasn't until 1955 that Hartman was released along with 16,000 other German prisoners after spending 10 1/2 years in Soviet POW camps. He died in  Eastern Germany.

He was an amazing man with a record unequaled by any combat fighter pilot.