Lita and I survived the family cruise. Seven of the children, their spouses, children and even grandchildren made up a group of almost forty people who sailed out of Seattle  on June 22nd on Princess  Cruise liner Star Princess. We had the vesssel all to ourselves with only some 2600 other passengers with a maximum capacity of 3100 passengers plus crew. We traveled 2,338 statute miles round trip arriving back in Seattle June 29th. 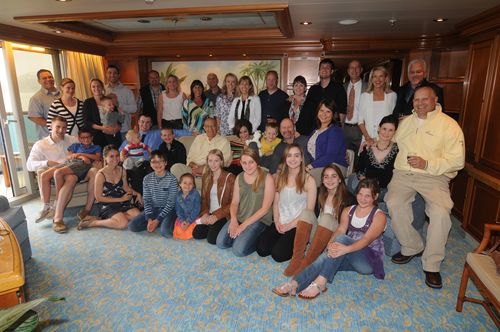 I was disappointed the vessel went out Juan De Fuca strait to the outside of Vancouver Island instead of traveling the inside passage which is much more beautiful. Even though this ship is 950 feet long and 118  feet wide the weather on the outside can be terrible. We were fortunate that the seas  were flat as a lake the entire trip up and back as I would not want not want to be caught in that open water.We cleared Vancouver Island and crossed Queen Charlotte Sound which was  also a flat lake.

On Monday we were in Chatham Strait and berthed in Juneau, Alaska where the sun was out and it  was hot. We are traveling with three other cruise shipes which arrive at different times, but often means up to a whole lot of passengers all in the small towns at  the same town. Lita and I did not get off in Jeaneau having been there many times. We left after a few hours and moved through Gastineu Channel on our way to Skagway.

On Tuesday we berthed in Skagway on Tuesday at 6:30 am. The weather here was warm and pleasant. We have also been here before, but we did a walking tour of the small town and went  backto the ship. We departed on the same day for Glacier Bay.

On Wednesday there was dense fog in the bay and the two cruise ships allowed at a time in the bay were blowing their fog horns. Everywhere around us was ice and small ice bergs floating in the water. After some time the fog lifted enough for us to view Lamplugh Glacier which was beautiful. From there we sailed for Ketchikan.

On Thursday we arrived around noon at Ketchikan with sunny weather. We walked around the city and enjoyed the warm sun. All of cruise ships were there at the same time. That's a lot of people in one small town. After a few hours we sailed South for Victoria.

We again sailed across Queen Charlotte and on the outside of Vancouver Island to get there, but the flat seas stayed calm all the way. We arrived in Victoria around 7:30 pm and were only there until 11:00 at night. It seems a strange time to arrive and leave. One wonders why they bothered. We did not get off in Victoria.

We arrived before 8:00 am in Seattle on Saturday and departed the ship without any problem. We were back in Gig Harbor before 11:00 am.

So, how was it, you ask? Well, to start with Lita got a large suite on the stern for us with a huge balcony and lots  of room. That made a lot of difference in making the trip enjoyable with this many felow  passengers. The service was very attentive and they had a lot of activities including those for children. The stops were not timed for the towns or locations. Less time in  Skagway and Glacier Bay. More time in Victoria or eliminate the stop. They had two "formal" nights and I brought a tuxedo because on the Seaborne line we usually sail on, that's what's expected. Here it was a mistake. Most passengers either ignored the requirement or wore a sports coat.

The good news  is that the family was together on the ship  and  they enjoyed each other. Overall it was a  great trip. Lita did  all the planning  and details so I just  walked  aboard and unpacked.

One thought on “THE FAMILY ALASKA CRUISE”