We just returned from a short salmon fishing trip to Sonora Island in British Columbia. We were at the

Sonora Resort which is about 230 miles by air from Seattle.  On Tuesday we flew  on Kenmore at Lake Union in a float plane for less than three hours and landed on a bright, beautiful day at the resort. Sonora Island is within the Discovery Islands at the mouth of Bute Inlet, which is one of the deepest Inlets in North America.

The resort is not your typical fishing camp where we normally have stayed. This resort a Relais & Chateaux property which means it is a luxury resort. The restaurant serves food you would expect in some of the best locations and the resort offers much more than guided fishing. They offer a large selection of indooor and outdoor activities. This includes a guided grizzly bear viewing, helicopter side trips including fly fishing, whale watching, tennis and Spa treatment. The facility is beautiful and the staff excellent. People come here and don't fish but, instead, enjoy these activities. In fact, you can get to it by resort helicopter from Vancouver in 50 minutes. We were there to fish, however, and while we did play a game of pool after lunch, we were determined to fish for the bright shinny salmon coming through the area. 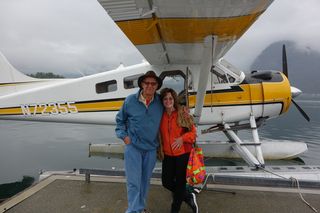 We fished with our guide in 20 foot Grady White boats with absolutely flat & calm seas on the afternoon of the first day we arrived. We fished wiith flashers and plastic squid for the most part at a good depth, trolling slowly. Whales were in the area on the way out, but didn't bother our fishing which was very good. That first afternoon we kept one and released five or more in a matter of four hours. Lita was the champion fisher person and we had a great afternoon. We returned to the lodge, changed and after an excellent meal we went to bed happy. 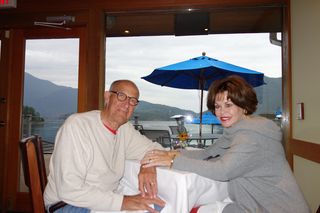 We were up the next day for breakfast and out again at 8:00 am. Really banker's hours for fishing. The lodge provides everything including 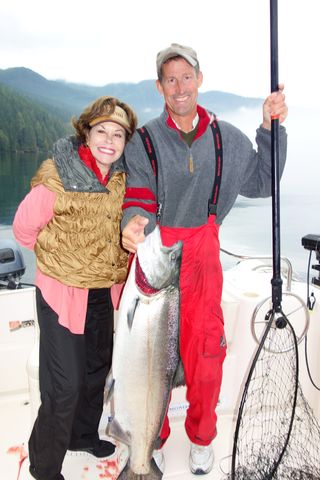 rain coats and pants, which weren't needed and the guide provides all the fishing gear. We had another beautiful day, sun out  with calm seas. Very few boats were fishing because it was so late in the season. The morning fishing was  good again. We kept one fish and released several more. We  came in for lunch ordering from  the menu which included a salmon burger and french fries. That afternoon Lita stayed to enjoy the spa activities and read while I went out again. Fishing was again very good. I kept one fish and  we released another five or six fish that afternoon. We were in before 5:00 pm and had had fresh salmon that night which was really wonderful.

The next morning, after breakfast, we went out again at 8:00 am. It was foggy, overcast  and misty. None of the few boats were doing much. Our fishing was slow, but after a couple of hours Lita suddenly tied into a large fish. The fish took her line and ran. It came out of the water and we could see if was a big fish. After a struggle she brought it in and it was netted. It turned out to be a bright, beautiful 30 lb Chinook. By lodge standards it was tyee size. The lodge people were impressed. She turned out to be the champion fisher person on this trip.

We had lunch and packed. Our Kenmore plane was late getting out of Seattle due to the fog in Seattle. It landed around 3:30 pm and we back in Seattle before long. We were back  home in Gig Harbor that evening. It was a great trip even though a short one.

One thought on “OUR SALMON FISHING TRIP TO SONORA ISLAND”