The New York Times reports that Tommy Lewis has died in Huntsville Alabama. He was 83 years old. Who was he that the NY Times would carry his obituary? He was infamous for one sudden, spontaneous decision he made when he was playing football for Alabama many years ago.

Lewis, a fullback, had scored for Alabama  in the first quarter. Late in the second quarter, while Lewis was standing on the sidelines Rice was at it's own 5 yard  line. Dicky Maegle, Rice's great All American back, took a hand-off and managed to shake off Alabama tacklers including Alabama's Bret Starr. He began to race up the sidelines on the same side where the Alabama team was standing. He was clearly on his way to a 95 yard touchdown when he reached the 42 yard line in front of Alabama team. Suddenly  Lewis rushed out on the field and tackled Maegle and then trotted back to the sidelines. 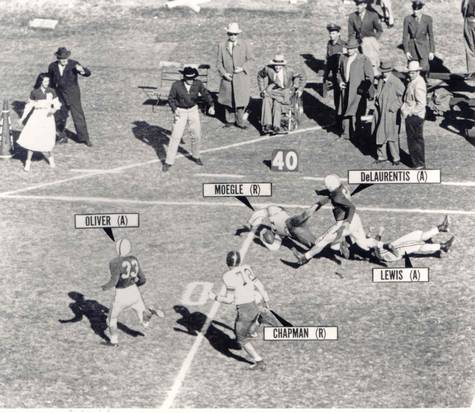 The 75,000 spectators were stunned. There was total confusion and  after conferring officials awarded the touchdown to Rice. Maegle went on during  the game to put on  the greatest rushing performance by any player in a  bowl game to that time. He finished with 265 yards and three touchdowns on 11 carries. Rice won 28-6 with Alabama's sole touchdown by Lewis.

The play commanded national attention. Two days after the Cotton Bowl, Maegle and Lewis were flown to New York and appeared on Ed Sullivan's Toast of the Town variety show. On the air, Sullivan asked Lewis what possessed him to make the tackle when he was not playing on the field.

Lewis said: "Well, I was just so full of Alabama, and I couldn't stand to see him make another touchdown. I lost my composure and tackled him."

Maegle earned All-America honors as a Rice senior. A first-round draft pick, he joined the San Francisco 49ers. He earned a trip to the Pro Bowl in his rookie season as a two-way player. His career included a stint with the Pittsburgh Steelers before he retired as a Dallas Cowboys defensive back in 1962.

Lewis served two years in the U.S. Army after college. After playing two years for the Ottawa Rough Riders in Canada, he coached high school football briefly in Tallahassee, Fla., and Gadsden, Ala. The irony is  that in a game he was  coaching, one of his players came off the bench and tackled an opponent. Lewis gave up coaching shortly thereafter.

Lewis became an insurance agent for almost 40 years. He retired two years ago and lived in Huntsville, Ala. He was Alabama season-ticket holder. Lewis had said that if he could take back one thing in his life, that play would be it.

Isn't it interesting how one decision in life can become the most significant thing one is remembered for no matter what they do after that time? A couple of examples come to mind:

Baseball great. Bill Buckner had over 2,700 hits in  his twenty year carrier with a batting average of .280, but is remembered for the sixth game of  the 1986 World Series when he made a fielding error. Captain George  Custer  will always be remembered for his  arrogance and miscalculation in the disastrous Battle of little Big Horn in 1876. And those are only two examples how we remember the mistake over the accomplishments.