I have enjoyed watching a television political drama series The Newsroom, written by Aaron Sorkin and which  premiered on HBO in June 2012 and ended in 2014. The acting is outstanding with Jeff Daniels playing the role of a TV anchor and Sam Waterston as the manager of the network. Sorkin's writing is entertaining and extremely articulate. in one program, Daniels  recites a lengthy  list of coincidences that impacted history. One example was the assassination of the mayor of Chicago in 1933. According to the  TV script the assassin was aiming for president elect Franklin D Roosevelt, but his bullet struck the mayor Anton Cermak. I had read about this event and was curious to re-read the facts. The facts do have an amazing twist that impacted future history. 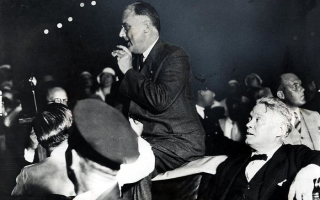 The assassin was Giuseppe Zangara, an Italian immigrant, who had worked as a bricklayer and had mental problems. He had purchased a five shot 32 caliber revolver for eight dollars at a down town pawnshop just days earlier. He was a short man, slightly over 5 feet tall. He was carrying a newspaper clipping in his pocket detailing FDR's schedule while in town.  With the revolver in one of his pockets he made his way to the third row of the seating area where he was unable to go any further. At this point he was about 25 or 30 feet from where Roosevelt was going to give a short talk from the back of a convertible automobile. It was Wednesday February 15, 1933 when Roosevelt gave an impromptu speech that evening from the back of the open car. He had just delivered the speech at Miami's Bayfront Park when Zangora opened fire.

However,  because of his short stature Zangora had decided to stand on a folding chair in order to have a clear view. The chair was wobbly which impacted his aim as he pointed the gun and as soon as he pulled out his gun people around him  moved to grab his arm as well. As a result he missed FDR but was able to fire five quick shots. His intended target, FDR, wasn't struck but Mayor Cermak, next to him was hit in the abdomen. One of the first casualties was Mabel Gill, the wife of the president of a power company, who was struck by a bullet and later died. Margaret Cruz, a 23-year-old visitor from New Jersey, was hit in the hand. Bill Sinnott, a 46-year-old New York policeman, suffered a glancing wound to the forehead. Russell Caldwell, a 22-year-old chauffeur, was hit squarely in the forehead, but the bullet didn't penetrate the skull and he survived. Secret Service agent Robert Clark, standing next to the convertible car, was hit in the back of his right hand. However. Cermak was hit in the abdomen and immediately doubled over in pain. FDR insisted that the car stop and that the Secret Service load Cermak into the convertible. Zangora might've been beaten to death by the crowd if FDR had not intervened telling the crowd to leave justice to the authorities. The car then sped off to Jackson Memorial Hospital but Cermak did not survive.

Zangora was initially tried for attempted murder and sentenced to 80 years in prison, but when Cermak later died of his wounds, he was re-tried and sentenced to death. Zangora died on the electric chair on March 5, 1933.

I guess you could say but for a wobbly folding chair Franklin Roosevelt may have died that day and the history of the depression as well as America's role in World War II might have been entirely different. It's an interesting part of history.