That's what the man said to me. At first I didn't hear him as I stood waiting to use the cash machine, but I turned and he repeated it. He was older than I was, but was in good shape.  "Yes, " I said. "How old are you?" he asked. I said "Eighty Two." "I'm ninety four" he said and walked into the bank. I'm at a point where I
have gradually learned to accept the fact that I am old and to appreciate people who hold the door open for me or offer assistance. It used  to offend my dignity, but now I am content with reality of it. Aging changes a lot of things including your self image and your mental outlook. As Sir Norman Wisdom once wrote: "As you get older three things happen. The first is your memory goes and I can't remember the other two."

The most meaningful statement about aging is from the late John Mortimer, creator of "Rumpole" who died at age 85. He wrote about the indignities of aging: "Dying is a matter of slap-stick and pratfalls. The aging process is not gradual or gentle. It rushes up, pushes you over and runs off laughing. No one should grow old who isn't ready to appear ridiculous."  It helps to have a sense of humor about the process.  Ronald Reagan once said "I have left orders to be awakened at any time during a 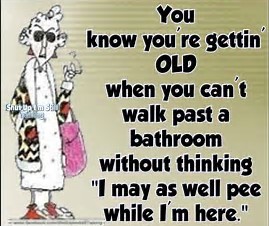 national emergency – even if I'm in a cabinet meeting." George Carlin joked: “I was thinking about how people seem to read the bible a lot more as they get older, and then it dawned on me—they’re cramming for their final exam.”

There a a lot of sources for advice about dealing with aging. I have a high school classmate who offers advice.  Not a whole lot of my high school classmates are still around, but i stay in contact with Donald Trafton who was in my class at Anacortes High School. He and his wife are staying active and contributing in many ways. He wrote in his blog about being eighty and "thriving.":http://being80.com/His advice about practicing meditation, getting exercise and other ideas make sense. A continual interest in dealing with aging helps keeps us going mentally, if not physically. There are a lot of sources for us including AARP http://www.aarp.org/

How we live our live has a direct bearing on our viewpoint as we age. Someone has said "Life's journey is not to arrive at the grave safely, in a well preserved body, but rather to skid in sideways, totally worn out, shouting "Holy Shit, what a ride!" Ralph Waldo Emerson also noted that "The purpose of life is not to be happy. It is to be useful, to be honorable, to be compassionate, to have it make some difference that you have lived and lived well.” The problem is that people too often fail to experience a life of concern and caring in their relationship to other people. Henry David Thoreau said men live lives of quiet desperation and die with their song inside." But, much of how fulfilling our lives are is dependent upon our care and compassion for others. "How far that little candle throws his beams! So shines a good deed in a weary world." – Shakespeare.

There are many benefits to getting older. Writer Maeve Binchy has written: "The great thing about getting older is that you become more mellow. Things aren't as black and white, and you become much more tolerant. You can see the good in things much more easily rather than getting enraged as you used to do when you were young. Mandy Hale wrote a book The Single Woman: Life, Love and a Dash of Sass. She writes “You’ll learn, as you get older, that rules are made to be broken. Be bold enough to live life on your terms, and never, ever apologize for it. Go against the grain, refuse to conform, take the road less traveled instead of the well-beaten path. Laugh in the face of adversity, and leap before you look. Dance as though EVERYBODY is watching. March to the beat of your own drummer. And stubbornly refuse to fit in.”
The Bible in Job 12 says "Wisdom is with aged men, With long life is understanding." One of the benefits of old age is the chance to learn from mistakes and gain wisdom. I am thankful to have had the years God has given me. There are many things in my life I would like to do over. To have avoided the hurt feelings I inflicted on others or the pain I've caused and to have another opportunity to do the good I had a chance to do, but failed to do. Yet, I treasure the abundance of gifts I've been given and especially that of m y life with Lita Barnett Luvera. Like the lyrics from Jimmy Buffet's song He Went to Paris I'd say the same thing about my life:
"Through eighty-six years of perpetual motion
If he likes you he'll smile, and he'll say,
"Jimmy, some of it's magic, some of it's tragic
But I had a good life all of the way."