In honor of National Day of Prayer, President Donald Trump has signed an executive order entitled "Promoting Free Speech and Religious Liberty" that will, among other things, fulfill his campaign promise to “get rid of and totally destroy” the Johnson Amendment. That was a rule, passed in 1954, and proposed by then-Sen. Lyndon B. Johnson, barring 501(c)(3) nonprofits, including churches and other religious entities, from “directly or indirectly” promoting political views in a political campaign. That restriction has been lifted and religious organizations can now advocate political positions without penalty.

In the last several presidential elections religion and politics have been blurred together by Christian leaders including Catholic Bishops. Bishop Thomas Tobin of Providence R.I. made headlines with his public disclosure "Why I switched to the Republican party" because of that party promoting laws conforming to Christian rules. The Republican party promises to appoint judges and enact laws that conform to Christian religious beliefs. Politics and religion have been mixed together by Catholic bishops, some of whom have advocated denial of communion to politicians and laity who have publicly said they are not in agreement with the official church  position on religious issues like abortion and same sex marriage. Catholics and Protestant 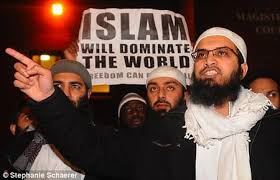 evangelicals strongly support candidates they think will enact rules and laws in agreement with their religious rules. Catholic leaders connect voting for "favorable" candidates with moral conduct. We live in a time where politics and religion are seen as blurred as one.

It’s true we historically are a Christian nation. “God” or the Divine is mentioned at least once in each of the 50 state constitutions. Some state constitutions even provided that a person must be a Christian to hold public office. References to God are in the pledge of allegiance, our money, the oaths we take and in many governmental ways.  Historically America has always been considered a Christian nation because that had has been the dominant religion of the country. Following the Texas floods we held a National Day of Prayer for those impacted. That's acceptable conduct for government in this country.  Even today, according to the Pew Research Institute 70% of Americans label themselves Christian. Non-Christian represent 6% of the population and the rest are unaffiliated with any religion. In fact, it is part of our history as a country to acknowledge God. It is historically proper to refer to God and otherwise recognize in our governmental affairs our countries relationship to being founded on principles that recognize a higher being. There should be no restriction on our historical and cultural history relating to God, nor restriction on that acknowledgement in governmental affairs.

But, it's the next gigantic leap many Christians want to make. They want to go further and make Christian religious ideas and beliefs the law of the land everyone must follow, Christian or not. However, the founders prohibited government enforced religion. The first amendment to the Constitution guaranteed that the federal government was powerless over religious matters except in prohibiting any nationally established church and in guaranteeing the free exercise of religion for all. It reads in part:

“Congress shall make no law respecting an establishment of religion, or prohibiting the free exercise thereof; …”

While some Christian leaders argue the Constitution only applied to the federal government leaving  states to do what they wanted, that's not constitutionally correct. Seventy years ago, Everson vs Board of Education was decided by the United States Supreme Court and applied the First Amendment to the states. That means neither state nor federal governments may endorse one religion over another or pass laws enforcing religious rules or otherwise inject religious commandments into governmental public affairs.

There is good reason for these restrictions. To illustrate what happens when specific religious beliefs are imposed by law on everyone else, all we need do is to look to the rest of the world. That’s the goal of ISIS. The Islamic state believes that Mohammed directed a worldwide caliphate or religious leader whose power and authority is absolute. Their goal is that the entire world be governed by Sharia law or Islamic law. Their terrorist activities are viewed by them as a battle between jihadist and infidels with Islamic law imposed on everyone. Elsewhere around the world, at least 30 of the world’s countries require the heads of state to have a specific religious affiliation. More than half of the countries involved require the office must be held by a Muslim. Three quarters of the world’s population of seven billion live under strong government restrictions on religion and serious rules regarding religious faith. Where Christians are the minority, in these countries, they are discriminated against and killed. When government is given the power to decide what religious practices and beliefs must be followed by everyone, whether they agree or not, that's what happens. It can't be called a democracy when we all must act and believe in the same religious rules or be considered breaking the law. We believe America is a constitutional nation. One that follows the constitutional principles and gives freedom of thought and religious belief to all citizens. No one religion should have the power to force its religious ideas on all Americans even if most Americans agree with the ideas. The constitution prohibits the establishment of a religion through religious rules imposed as laws and guarantees freedom of thought.

We may be a Christian nation by population, but we constitutionally can’t be one by law. Suppose we substitute Islam for Christianity as the majority religion in this country with same 1st amendment constitution. If the majority population of Muslim’s had the same goal as Christians have of  passing laws that support their religious rules,we would have Islamic laws. They would apply to family law, criminal law and personal beliefs. Penalties for apostasy, blasphemy and not praying in conformity with Islamic law would apply. Women could  be required to wear burka’s in public and not be allowed to drive an automobile just as that is true in Muslim countries with strict Islamic law. We minority Christians would be outraged and demand our constitutional rights  of freedom from religious laws. Yet, Christians have no problem with the idea of Christian imposed  laws on everyone. For me, it doesn’t make any difference what religion we are talking about when we apply the 1st amendment to  promoting religion in government. It’s not only unconstitutional but against American democracy of equal treatment to incorporate religion into public laws.

That’s why I believe it is wrong for religious leaders to tell Christians they should or must vote for political candidates because the candidate has said he or she will support laws that impose their moral rules on everyone else. Christians who primarily support or vote for a candidate with the intention of having their religious beliefs made law everyone must obey, are acting in conflict with American democracy. Views about contraception, same sex marriage, homosexuality and abortion are essentially moral religious issues, not legal or political ones. Personal religious beliefs should not be forced on everyone through laws. Christians are entitled to believe and support their moral views about these subjects, but not make them a law all Americans, including those who don't have the same religious beliefs, must follow. Elected officials are not elected to promote one religious belief on everyone. They don’t put their hand on the Constitution and swear to uphold the Bible. It’s the other way around. Nor are judges allowed to impose their personal agenda through judicial opinions. Yet, Christians who work to support candidates and parties only because they want to have government or judicial opinions impose their Christian religious rules on everyone have the same goal as ISIS. In our constitutional democracy to do so is morally and legally wrong.

Maintaining our historical position that the America is a nation under God and the appropriate role of the divine in government is appropriate.  But, it is a considerable different thing from what many Christians want – Christian rules made law. Freedom of religion and freedom of religion in government is, for me, the only safe way to avoid the risk religious tyranny.