In a recent edition of a national Catholic publication, The National Catholic Register, a Catholic monsignor, Father Charles Pope, wrote a column he entitled “Abortion Supporters Must Face penalties.” In it, he insisted Catholic's and especially Catholic politicians, who support laws in conflict with Catholic catechism should be punished by the Church. Specifically, he advocated sanctions against Catholic politicians who fail to support the Catholic position on abortion including forbidding  communion and even issuing formal ex-communication against them. From his viewpoint, the United States elected and appointed officials would ideally be limited to only Catholics or those who support Catholic moral teachings and oppose laws in conflict. Should they fail to do so, he says they should be punished by the Church and, presumably, removed from office. 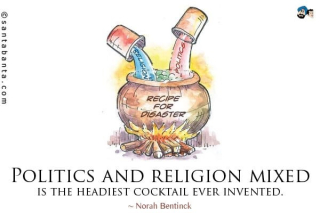 His column suggests a perfect America would consist of only Catholics or those who agree with Catholic doctrine to serve in political or judicial office in America. Their role would be to advance laws, judicial opinions and their government function to support Catholic moral ideas and oppose any in conflict. A failure would result in punishment. It doesn't seem to occur to him, and many who agree with his idea, that their perfect political America would be in violation of the United States Constitution as well as virtually all state constitutions. That's because America is a pluralistic society of multiple religions and beliefs. Our constitution was created to avoid a monarchy, dictatorship or national religion. People elected or appointed to political office in America are charged with serving the will of the majority of people, not advance their personal religious ideas. The role of the judiciary is to be totally objective in enforcing laws and our constitutional requirements, not promote personal religious ideas.

John F. Kennedy said it well in his speech to the Greater Houston Ministerial Association September 12, 1960:

"I believe in an America where the separation of church and state is absolute–where no Catholic prelate would tell the President, should he be Catholic, how to act, and no Protestant minister would tell his parishioners for whom to vote—and where no man is denied public office merely because his religion differs from the President who might appoint him or the people who might elect him."

When the late former governor Mario Cuomo was attacked by a New York Catholic Bishop for refusing to ask for a state constitutional amendment prohibiting abortion, Cuomo said:

"I believe in an America that is officially neither Catholic, Protestant nor Jewish–where no public official either requests or accepts instructions on public policy from the Pope, the National Council of Churches or any other ecclesiastical source–where no religious body seeks to impose its will directly or indirectly upon the general populace or the public acts of its officials–and where religious liberty is so indivisible that an act against one church is treated as an act against all."

Monsignor Pope’s ideas are supported by groups of evangelical and fundamentalist Protestants whose goal it is to elect politicians and judges who will support their moral religious beliefs irrespective of other viewpoints. These people strongly promote appointing judges with religious agendas that support their moral beliefs, especially about abortion. They want to elected politicians who will vote for laws that advance their religious ideas of morality and oppose those in conflict. But, that America is not the America our founders created nor one any rational person would want.  All we have to do is look at countries with national religions imposed on people to see the impact of loss of freedom of religion. How would these same people react if American laws passed by politicians and approved by judiciary required women to wear burkas or for men to pray five times a day facing Mecca? How can they logically approve the idea of promoting laws imposing their Christian moral beliefs on all Americans and judges who will approve them whether the majority agree with them or not while objecting to the same thing being done to them by other religions. There is a reason for the constitutional provision for freedom of religion and the constitutional balance of power to avoid this very situation. As a life long Catholic and an attorney with an appreciation of a constitutional America the reality that religion and politics have never mixed well seems so obvious.