In an article by Elizabeth Goitein in the January/February 2009 Atlantic Magazine a “national emergency" declaration was explained. The article pointed out the premise underlying emergency powers is simple: The government’s ordinary powers might be insufficient in a crisis, and amending the law to provide greater ones might be too slow and cumbersome. Emergency powers are meant to give the government a temporary boost until the emergency passes or there is time to change the law through normal legislative processes. 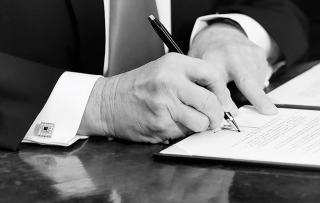 While the U.S. Constitution itself includes no comprehensive separate regime for emergencies. Those few powers it does contain for dealing with certain urgent threats, it assigns to Congress, not the president. For instance, it lets Congress suspend the writ of Habeas Corpus—that is, allow government officials to imprison people without judicial review—“when in Cases of Rebellion or Invasion the public Safety may require it” and “provide for calling forth the Militia to execute the Laws of the Union, suppress Insurrections and repel Invasions.”

Aiming to rein in this proliferation, Congress passed the National Emergencies Act in 1976. Powers available under this Act are limited to the 136 emergency powers Congress has defined by law. The legislation was signed by President Gerald Ford on September 14, 1976. As of February 2019, 59 national emergencies have been declared, and the United States is under 31 continuing declared states of national emergency. Under this law, the president still has complete discretion to issue an emergency declaration—but he must specify in the declaration which powers he intends to use, issue public updates if he decides to invoke additional powers, and report to Congress on the government’s emergency-related expenditures every six months. The state of emergency expires after a year unless the president renews it, and the Senate and the House must meet every six months while the emergency is in effect “to consider a vote” on termination. Nonetheless, some legal scholars believe that the Constitution gives the president inherent emergency powers by making him commander in chief of the armed forces, or by vesting in him a broad, undefined “executive Power.”

The article says that by any objective measure, the law has failed. Thirty states of emergency are in effect today—several times more than when the act was passed. Most have been renewed for years on end. And during the 40 years the law has been in place, Congress has not met even once, let alone every six months, to vote on whether to end them.

This country's constitution is the outcome of the national concern expressed in our Declaration of Independence about the fear of allowing power in a monarchy or dictator. The Constitution's entire framework was designed to create a series of checks and balances on power so that no one person or small group would be in control. Everything about the document reflects the determination to put power in the hands of the people and avoid power in a monarchy or dictatorship. However, to function correctly, the Constitution requires people of integrity and national best interest to the selected. Positions of appointed and elected office have to be filled with men and women who will honor the Constitution over political or personal gain. For example, if Congress fails to perform its function of monitoring power in the executive or judicial branches by enforcing the Constitution, a president can appoint to the judiciary judges who are not unbiased and who have a political agenda. If the judiciary is not carrying out its duty of enforcing constitutional limitations upon the president, he or she becomes empowered in a way is in total conflict with the Constitution. If Congress fails to enact legislation which has an objective national purpose instead of laws which favor political or personal interests, an important check on power is lost. It is only where all three branches are working as intended by the Constitution that we have the correct balance of power. If you disable one of the checks, the whole system fails. If no check is put upon president to declare a national emergency when there is none, the president becomes a de facto dictator. It is such a sweeping power put in one person, at a very minimum there should be congressional debate and discussion first.

Traveling carnivals would sometimes feature side show "freaks" like the person who could contort themselves into impossible shapes. They would be touted as "the spineless wonder." Well, we have our own spineless wonders in Congress led by spineless Mitch McConnell who, as Senate leader, quickly caved into Trump's declaring a national emergency. Why? Purely out of political self interest. The fear factor of the potential damage a Donald Trump might do to those politicians who oppose him in the 2020 primaries. We need congressional leaders of integrity who aren't primarily looking to their own political self interest to maintain the Constitutional checks and balances essential to our democracy.

I would hope Trump supporters recognize the danger of that situation irrespective of their political views. So long as the president, members of Congress and judges fail to honor the Constitution with honor and integrity our country is at risk.