IS IT CHRISTIAN TO DECIDE THE ENDS JUSTIFY THE MEANS?

The New York Times ran an article "Evangelicals Closing Ranks with President" regarding evangelical support for Donald Trump after a Christian publication supported his impeachment. One letter to the editor was this one:

“Like many Americans, I don’t like President Trump’s rude and hostile tweets and comments; I abhor his lack of both repentance and humility. For these reasons, as an evangelical Christian, I would never hold up Mr. Trump as an example of someone who lives out his Christian faith. But morality has never been a qualification for the office of president…Many on the left are up in arms because some Christians do not want to do things that conflict with their
religious beliefs, like provide abortion services or wedding services for same-sex couples. We may or may not agree with these beliefs, but we should support the right of our fellow Christians and people of other faiths to believe these things. Mr. Trump will support those rights; Democrats would trample them. Our country and our Christian faith can survive immoral presidents…” 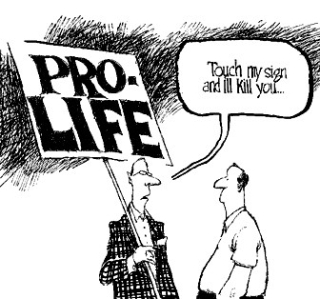 The sentiments expressed in this letter are the common justification given by Christian evangelicals, including American Catholic bishops, for supporting President Trump in spite of his words and conduct. Like someone holding their nose, they are fully aware of his lies, his undemocratic presidential actions and his personal immoral conduct, but continue to support him anyway because he is promoting their selfish interests. In poll after poll of evangelical Christians have condoned their hypocrisy in supporting Trump by arguing he has kept his promises to appoint conservative Supreme Court justices and that his actions regarding their religious beliefs show he  is “on the right side of God.” Franklin Graham, son of the evangelist Billy Graham, said the only explanation for Trump being in the White House was that “God put him there.” Worse, their actions say: " He may be unchristian in all of his conduct, but we still support him because our goal is to impose our religious beliefs on everybody else by passing laws and packing the courts with judges who agree with us." That justification is in violation of the  the U.S. Constitution and fails every basic Christian test.

All of these excuses rest the idea "the ends justify the means." This discredited notion has several names: "Situation Ethics," "Moral Relativity," "end justifies the means," "practicality," and other terms. One man called it "using the devil's tools to do God's work." However, it is never right to do what is wrong. Christianity has always taught that this rationalization is flawed and contrary to Christian beliefs. Christians are the last people who should offer this as an excuse for condoning and a political leader they know is being immoral and undermining the constitutional fabric of this country. Teddy Roosevelt once said: "No man is justified in doing evil on the ground of expediency."

What I do not understand is why Americans, who have this point of view, do not see the evil in having the objective of imposing their personal religious beliefs through laws on all Americans whether they are Christian or not? What kind of a constitutional democracy do we have when one group of Americans are campaigning to pass religious laws which would impose their personal religious views on everyone else? Why would they in good conscience support an immoral and dishonest leader whose policies undermine American values, the environment while benefiting big business and corporations, but who is willing to help them pass laws Imposing their personal religious views on everyone else whether they agree or not?

Governor Mario Cuomo of New York was criticized by religious leaders for not promoting a state constitutional amendment prohibiting abortion. In response he said, “When should I argue to make my religious value your morality? My rule of conduct is your limitation? What are the rules and policies that should influence the exercise of the right to argue and promote values? I believe I have a mission as a Catholic. Does that mean I am in conscience required to do everything I can as governor to translate my religious values into the laws and regulations of the state of New York or the United States?” On another occasion he said: “politically, I’m saying, I’m not required to do that. I’m not required because I’m a Catholic, to make everybody else Catholic. To make everybody else Catholic by passing a law. I’m not required to use politics to achieve with the church cannot accept to the pulpit. “