While going through some documents I found my original membership card for the Washington State Bar Association. It was dated 1959. I was a 24-year-old brand new lawyer in 1959. I had proudly gone to the Skagit County Courthouse with my wife and both parents for the ceremony I would take the oath become a lawyer. My friend David Welts, and his wife and parents were there for our joint ceremony. Judges Arthur Ward and Charles Stafford presided together for the ceremony. Alfred McBee, local lawyer and David’s father, Robin Welts, presented as to the court saying complementary things about us 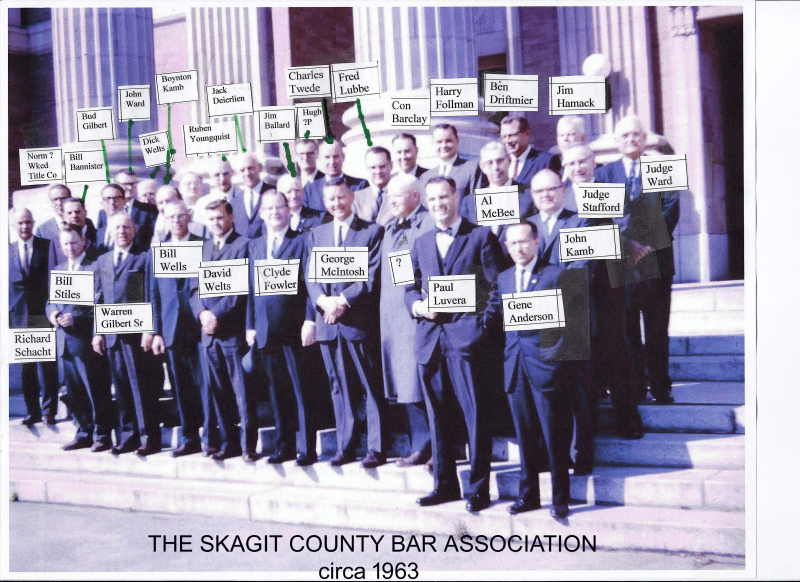 both and we took the oath becoming lawyers.

The membership card for the Washington State Bar Association I received was numbered 849 and there were probably only 3600 or so lawyers in the entire state. Today there are over 38,000 lawyers in the state. Finding the membership card triggered a number of memories. I smiled at remembering that Aaron light was the county coroner from 1947 to 1970. He was the owner of the Light Funeral Home in Mount Vernon. There was a physician in the county, Dr. dark. The locals liked to say: "Yes, from Dark to Light.”

The entire legal system in Washington and, in fact, throughout the country was much simpler than it is today. The Bar Association headquarters was in Seattle and it had one full-time Executive Director, Alice Ralls. She had been admitted to the bar in 1931 after attending Lincoln High School and the U of W law school. She was virtually the only full-time director for the Bar Association for a considerable period of time. There were no staff of hundreds, no multiple committees and no complex organization structure. The Bar was almost entirely a volunteer organization, very unlike the situation today. Not only was the law practice considerably simpler than compared to now, but there were far less laws. The revised code of Washington, at that time, was contained in two volumes compared with the many volumes it occupies today and is still growing each time the legislature meets.

Today we have volumes of rules regarding evidence in trials, pattern jury instructions, rules of procedures and local rules. A considerable part of the trial practice is occupied with procedures for discovering facts through written questions, sworn testimony before trial and multiple other rules of discovery. Volumes are written on these procedures and numerous cases interpret them. However, in 1959, there were virtually no local rules by the courts except the most basic. There was little or no disclosure of information before a trial began. Sworn testimony wasn’t taken before the trial through depositions except on a limited basis involving clients. Written questions by interrogatories were extremely limited in their scope. Trials were conducted by what the law calls today “surprise.” You did not know who the witnesses were in advance and you did not know what they were going to say until they said it at the trial. As a trial lawyer you needed to be skillful enough to be able to cross-examine immediately after you heard the testimony for the first time in court. As a result, trials were entertaining. Lawyers needed to know and be able to quote literature as well as Scripture. Jury arguments were entertaining. Spectators came to watch trials just for the fun of it. After all, television was a new form of entertainment and radio was still in its glory.

After being licensed as a lawyer I tried to find a job, but nobody wanted to hire me. My friend David was fortunate to go to work with his father at the Welts law firm with his father and uncle, but I was unsuccessful in my search for a job in Skagit County. I finally was hired by Walter J. Deierlein, Jr. who was the prosecuting attorney in Skagit County with the office in Mount Vernon. The other deputy prosecuting attorney was Harry A. Follman. I always suspected that my father, who knew Jack and was politically active with him,  had something to do with my getting the job. The pay was about $275 a month and it was part time. That is, one could have private law practice and be a deputy prosecutor so long as you fulfilled your prosecutor’s duties.

In addition to Superior Court prosecutions I was assigned the Justice and lower court prosecutions. The trials were in what was then Justice Courts and City Courts. Before I was hired, the police, sheriff, fish and game and state patrol actually prosecuted the people they had arrested without any prosecuting lawyer present. The cases would be set for trial, the officer would appear and be called to the witness stand by the judge who would question him.The defendant seldom had a lawyer and the judge would conduct the trial. The judge would usually allow the arresting officer to ask questions of the defendant. I addition, the law did not require Justice Court judges to be lawyers. We only had one lawyer who was a Justice Court judge and he was in Mt Vernon. The rest of the county justice court judges were part time judges and were non lawyers. Garage mechanics could be appointed judge. When I began prosecuting these cases I worked with these experienced police officers at the trial. They became skilled at these trials. I remember prosecuting case with a fish and game officer as one of my first justice court cases. The officer’s name I still remember, Bill Guffler. The defendant was testifying, and Bill actually leaned over to me and said “Object. That's hearsay” and I did. The judge sustained the ojection.

It was a simpler and far more relaxed time than the law practice today.