I think the political reality is that if the Democrats had been in control within a few weeks of a presidential election, they very likely would gone ahead and confirmed their selection of a Supreme Court justice before the election just like the GOP is doing now. My problem is the offensive hypocritical conduct of the GOP leadership this year in contrast to the last appointment. The GOP two leaders responsible this are the chairman of the judiciary committee overseeing the selection approval, Leslie Graham, and the leader of the Senate, Mitch McConnell.

After blocking the Obama selection, Senator Graham said in 2018 that the Senate would apply the same rule that is, they would wait until after the presidential election to vote on a Supreme Court pick. "I'll tell you this – – if an opening comes in the last year of President Trump's term, and the primary process has started, we'll wait until the next election." The promise the GOP would wait until after the election is now being completely ignored now that it has happened. For 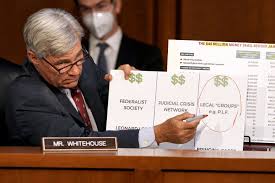 his part, McConnell, in blocking President Obama's pick for the U.S. Supreme Court eight months before the presidential election, said:  "The American people may well elect a president who decides to nominate Judge Garland for Senate consideration. The next president may also nominate someone very different. Either way, our view is this: Give the people a voice."  But, McConnell, like Graham, has applied a completely different rule now that the situation is reversed. It is this blatant lack of integrity that is disgraceful and application of two conflicting rules that is dishonest and offensive.

As to Trump's selection Judge Barrett, is unquestionably going to be approved before the election. My personal view, from what I have read and the limited amount I have watched the confirmation hearings, is that judge Barrett appears to be a competent jurist. As a mother of multiple children including adopted minority race children, she and her husband are likely to be good compassionate people. From what little I have seen and heard, as well as her judicial writings, she clearly is bright and intelligent I also think it likely she is an honest person of integrity. I doubt that one could make an valid argument that she isn't qualified, from a legal or good character standpoint, to be on US Supreme Court. By all objective standards, based on what I have seen and heard, she meets and exceeds the qualifications to be on the court.

So, what's the problem? Aside from the dishonest and duplicitous application of fair rules by O'Connell and Graham, it lies with the basic requirements, under our balance of power constitution, for a judge, especially one on the US Supreme Court. The Constitution has no qualifications for a person to be on the U.S. Supreme Court. There is no age, education or experience requirement. It does not even require a law degree to be on the highest court. What then, do I mean about "qualifications"? The Constitution creates three branches of government: the executive, legislative and judicial. In its simplest terms the executive is charged with governing leadership. The legislative branch is charged with passing laws. Judicial is charged with ensuring that the laws form to the Constitution and our lawful and are lawful. It is not the role of the judicial to implement law or exercise religious, political or personal agendas. The unstated, but existing basic qualification for a judge is objective fairness. Almost all legal scholars would agree a judge should have these qualifications: (1) fair mindedness (2) well versed in the law (3) personal honesty and integrity (4)  judicial temperament (5) intelligence to think and write logically and (6) the demeanor of handling judicial power sensibly.

Considering all of these factors, objective fairness and neutrality to the parties and issues in the case is the most important. If these two are lacking, if the judge has already decided issues or favors parties in advance of the hearing, there can be no fair trial or no fair final decision. With Judge Barrett considerable documentation exists she has very strong religious beliefs about subjects like abortion, same sex marriage and other decided opinions of the court. In fact, President Trump, the GOP and religious leaders have made it clear they are assured that her appointment will result in the reversal of Supreme Court cases they object to on religious grounds. In fact, they are loudly and publicly cheering the fact that her appointment will mean a change in laws through Supreme Court decisions that will enforce their religious beliefs on these and other important subjects. Donald Trump has taken all credit for her selection with religious leaders and conservatives. The GOP senators are all joining in seeking election approval from conservative and evangelical Christians on the basis of their assurance judge Barrett will reverse opinions they disagree with and join one's that promote their conservative and religious views. In other words, they believe they know what she will do before she hears any of the cases involving these issues. Her deep religious views and her writings as well as her legal decisions confirm her strong feelings on religious and legal subjects that are of significant consequence in this country. There is little dispute about her strong views and her religious commitment as well as her viewpoint on key legal issues.

However judge Barrett over the past few days of the hearings about her confirmation, has repeatedly and continuously assured all of the senators of her ability to not allow these views to influence her legal decisions as a Supreme Court judge. She has maintained that she will only decide cases on the basis of the law and with a open mind by setting aside these existing strong religious and legal views she holds dearly. From what I am able to see, I believe Judge Barrett sincerely and genuinely believes this and would attempt to carry out what she has assured committee members about. If judge Barrett is honest and sincere in her assurance that she will not allow these existing beliefs and viewpoints to influence her decisions in cases presented to the court, what's the problem?

There is abundant and uncontroverted research over a period of time that confirms certain truths about human nature. These truths include the fact that people simply cannot accurately evaluate whether they have biases with regard to issues. Even when they are aware of biases they are largely unable to accurately evaluate the extent to which those biases will drive decisions or influence opinions. Most importantly, research clearly shows that people are simply incapable of not having strong value beliefs, biases and significant past experiences influencing their thinking, opinions and decisions no matter what they do.

Whether it is a judge, even a US Supreme Court judge, they have the same inability to avoid the impact of existing beliefs. Many lawyers and judges were graded in law school by their grades and judged one another from the standpoint of intelligence. There law school experience and most often their teaching was that people make decisions rationally on the basis of the available facts and evidence applying logic. However, studies using MRI devices and other scientific research have completely debunked this idea. People make decisions largely at a subconscious level and only then apply a rational reason after the fact. We know that decisions are virtually impossible without an emotional component involved. In fact research shows that emotion drives most decisions and opinions and viewpoints. This concept has been illustrated by a person riding an elephant. The rider represents the conscious rational mind and elephant represents our subconscious bias, opinions and our deep values as well as our past experiences. They may believe they are in charge, but they go where the the elephant wants to go.

Judge Barrett may be sincere, but she's a human being. Her efforts to recognize bias or not allow it to influence her are fruitless no matter how sincerely she tries. She, like every other primate, lawyer or not, are controlled by the same decision-making process. My apprehension about judge Barrett is not about her integrity or her qualifications, but about her pre-existing strong values, opinions and religious views. No matter how hard and sincerely judge Barrett (or any other judge) may try and honestly attempt to not allow personal views to influence their decision they will not succeed. It is against human nature. It has been scientifically proven to be something that can't be done successfully.

My apprehension is that judge their will continue to follow her already existing religious and legal views in spite of all efforts and therefore is not qualified to serve on a court where objective, fair decisions are made. Our constitution does not allow the courts to impose religious views on citizens because of the personal religious views of a judge. People who already have made up their minds on issues should not be allowed to be a judge deciding those issues.