There are a lot of ways to describe the out of control circus American voters were subjected to last night. NBC News veteran Andrea Mitchell called the debate a disgrace. NBC's Chuck Todd called it a train wreck. CNN's Jake Tapper called it “a hot mess inside a dumpster fire inside a train wreck.” Some called the debate the “worst thing I’ve ever seen.” With no commercial breaks, viewers were subjected to 90 minutes of uncontrolled interruptions and a total lack of order. Cable TV analysts and focus groups were unanimous in condemning the raucous debate after constant interruptions and injections by Trump derailed any attempt at discussing the issues. 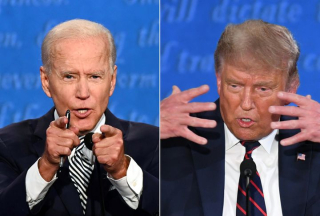 President Trump deliberately and with calculation made last night’s candidate meeting intended to be informative instead a bad joke. Moderator Chris Wallace reminded both candidates at the start of the session, that they had agreed and promised they would not interrupt each other while abiding by time limits. However, within seconds of starting the debate, Trump broke his word by spewing out a continuous stream of interruptions every time Joe Biden tried to talk. CBS News O’Donnell pointed out “Trump's strategy tonight was to interrupt, to try to steamroll not only his opponent but also the moderator who was unable to keep control of the two candidates.”

In fact, the moderator, Chris Wallace was totally unable to maintain or restore any order for the entire session. Trump’s constant interruptions clearly overwhelmed Fox News anchor Wallace. He totally failed in his role as a moderator to enforce the agreed rules and control the session. It was pointed out that for the entire debate he looked like a man trying to stop a runaway train with his bare hands. “Chris Wallace's debate performance tonight is a great reminder that kindergarten teachers are underpaid,” “The Daily Show” host Trevor Noah tweeted during the 90-minute encounter. Twitter was ablaze with complaints that Wallace had lost control. “Chris Wallace did not act as a moderator, Donald Trump did not act as a debater,” said MSNBC host Nicolle Wallace.

His attempts at being a moderator in control involved totally ineffective attempts like repeatedly pleading to no avail: “Please let him speak, Mr. President.” The Fox News host tried pointing out to Trump that he had the role of moderator and was the one to ask questions, not Trump. He deferentially told Trump that he hated to raise his voice as moderator while reminding the president his campaign had agreed to the ground rules. But all pleas were simply ignored. Instead, Trump bulldozed ahead in the face of Wallace’s pleas and protests. It was all futile. With no help from the moderator, Biden was left with responding by mutual interruptions. Wallace often just seemed to give up. At one point he told Trump he was going to ask a question about race, “but if you want to answer something else, you can.”

What could a competent moderator have done? To start with Wallace’s demeanor was wrong. You do not deal with an out of control bully by politely asking to “please play nice.” He did not assert control in a strong manner nor firmly reprimand Trump for conduct. He did not impose any sanctions for Trump’s violation of the rules. Instead he allowed Trump to steamroll over him without sanction. He could have deducted from Trump’s allotted time, the time he took in interrupting and preventing Biden to speak. I also think Biden could have done more. Biden’s reaction to Trump school yard conduct was to try to over talk Trump in a statesman like manner. That does not work in a bare-knuckle fight with a no rules opponent. Biden should have directly called Wallace out by reminding him of their mutual promise not to interrupt and Wallace’s role as moderator to enforce it. Biden might have called Trump out for this broken word instead of trying to respond to his lies. Rather than become involved in a fruitless argument of interruptions, I could even imagine Biden saying if the rules are not going to be enforced there is no reason to continue and actually terminating the debate. Instead, we experienced the moderator being too much of a gentleman who did not know what to do and ultimately surrendering control to Trump and the candidates mutually interrupting each other.

Chris Wallace struggled to get a word in edgewise as Trump steamrolled through the 90-minute session, spewing falsehoods about voting by mail, health care, climate change and the COVID -19 pandemic. It was pointed by commentators, Trump spent almost the entire debate interrupting both moderator Chris Wallace and Democratic rival Biden His interruptions were a mix of lying about both his and Biden’s positions while refusing to condemn white supremacists as well as repeated attacks on Biden’s family. CNN fact-checker Daniel Dale said President Donald Trump's performance consisted of “an avalanche of lying,” One commentator said: “One of the lowest moments of the 90 minutes came toward the end of the debate, when Trump unleashed a string of lies about mail-in voting, falsely claiming it would lead to fraud as he sowed doubt about the legitimacy of the November 3rd election.”

There is no benefit in having any more out of control events like this one. Viewers learned nothing except how un-presidential Donald Trump is. They also learned his promise to not interrupt meant absolutely nothing to him. They saw that he easily tells out and out lies. And they saw in full display his tactic of deliberate bullying to prevent his opponent from speaking. A fair fight is not something he is capable of dealing with. Consequently, what is the purpose in more dog and pony shows that have no meaning for voters? As ABC’s Martha Raddatz said afterwards “I think at some point you just have to stop it. It was not a presidential debate. It was mud wrestling. I think the question we're all asking tonight is, ‘Can we really have two more of these?’” If there is a repeat the Biden campaign should insist on some form of significant control. Robert Gibbs, who was President Barack Obama’s first White House press secretary, suggested the commission needed to give moderators the power to cut off the candidate’s microphones. Whatever the remedy, this fiasco must not be repeated. It is a waste of voter’s time and a national embarrassment.