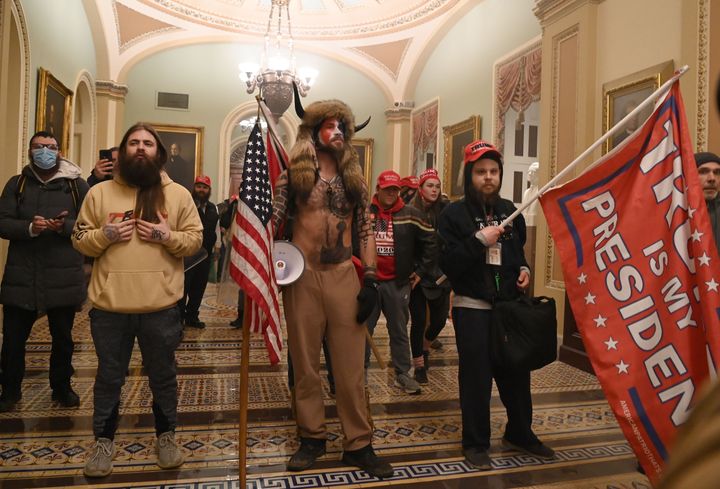 Yesterday,  Wednesday, January 6, 2021, marked the shocking events which normally occur only in Third World and Banana Republic areas of the world. In addition, it involved both Washington’s: Washington DC and Olympia Washington. We witnessed out of control mobs taking over the legislative build 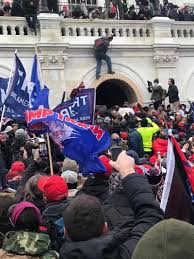 ing and trying to take over government to restore Trump to office.  The rioters were egged on by the president of the United States, who has spent weeks falsely attacking the integrity of the election and had urged his supporters to come to Washington to protest Congress’ formal approval of President-elect Joe Biden’s victory. The protests interrupted those proceedings for nearly seven hours. The mob broke windows, entered both the Senate and House chambers and went into the offices of lawmakers, including House Speaker Nancy Pelosi, D-Calif. Four people died, one of them a woman who was shot and killed inside the Capitol. Three other people died after suffering “medical emergencies” related to the breach, said Robert Contee, chief of the city’s Metropolitan Police Department.  Police said 52 people were arrested as of Wednesday night, including 26 on the Capitol grounds. Fourteen police officers were injured. It was clear the capital police were woefully unprepared to secure the safety of the building and the lawmakers inside and spite of the incendiary speech Trump gave and all of the obvious warning signs that this was likely to happen.

During a Washington D.C. rally earlier on Wednesday, Trump told the crowd: “Mike Pence, I hope you’re going to stand up for the good of our Constitution and the good of our country and if you’re not, I’m going to be very disappointed in you, I will tell you right now.”“ He told his supporters in the crowd “Because you’ll never take back our country with weakness, you have to show strength, and you have to be strong. We have come to demand that Congress do the right thing and only count the electors who have been lawfully slated. Lawfully slated. I know that everyone here will soon be marching over to the Capitol building.”

Trump was in the White House watching the coverage as the mob converged on the Capitol, at one point tweeting his irritation with Vice President Mike Pence, who as the president of the Senate 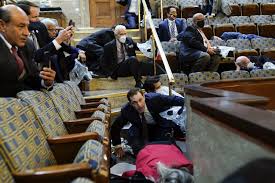 had gone to the Capitol to oversee the count, which is all the law and Constitution empower him to do. Pence defied Trump’s calls for him to try to unilaterally invalidate the election result. That caused Trump to attack him.  “Mike Pence didn’t have the courage to do what should have been done to protect our Country and our Constitution,” Trump tweeted. Trump, who last year condemned Black Lives Matter demonstrators as “thugs” and signed an executive order endorsing prison sentences for protesters who damage federal property, was silent on the damage by the Capitol rioters, and instead praised them.

In Olympia, at the state capital,  Trump supporters broke through a gate to a fence and invaded the area in front of the residence of the governor. They waved flags shouted and chanted slogans while law enforcement stood guard on the front porch. The governor and his wife had to be evacuated for safety concerns. Some protesters were armed. They did damage to the property and after a half-hour standoff with law enforcement they left the grounds under threat of arrest. A patrol spokesman later said that no arrests were made, but that investigations related to trespassing and the broken gate would occur and if it was determined that charges should be made, those would be passed on to

prosecutors. The patrol said the determination to not make arrests in the moment stemmed in part from the calculus that, “If you make one arrest that could agitate the crowd and make things worse.” (A sentiment I strongly disagree with personally)

We have had a continuous attack upon the constitutional framework of this country over the past administration term of office.  The concept of ensuring that we have a Republic and not a monarchy has been deliberately and systematically attacked. The victim of this includes the constitutional check and balance system for the judiciary, executive and legislative branches of government. Over the past administration term this constitutional framework has been virtually destroyed. It has happened under the direction of the president and Senate leader Mitch McConnell. They  deliberately loaded judiciary appointments with people who had a religious and political agenda they wanted. With the help of the Federalist Society they selected people who were presumed would ignore their oath of office of objectivity and fairness by imposing these religious and political ideas on everyone else.  The legislative branch was corrupted by the financial and other support of  religious, corporate and other interests by the election of legislators with a similar religious and political agenda. The executive branch, led by President Trump, made cabinet and other executive selections of people who had these same agendas. Corporate regulation and controls, environmental protections and most other areas of government responsible for balanced administration were totally corrupted by this process.

Legislative leaders like Lindsey Graham, Ted Cruz and Mitch McConnell led the group of leaders in their  abandonment of their oath of office to carryout their duties for the good of all people. Instead, they put their own  personal self interests as well as interests of  reelection first. Honesty, morality and duty of office were quickly abandoned by too many cabinet members, judges and  legislators following the lead of the president. Instead the false idea that the ends justify the means as well as putting first  looking out for yourself became the customary approach. The idea of sacrifice of self-interest for the good of the nation was quickly abandoned. In four years of this administration Republican Party was completely changed into a group of followers of Donald Trump. The traditional Republican Party doesn’t exist anymore. The unscrupulous, out-of-control and self-centered leader has  become the party.  The best evidence of this was that the Republican Party for the first time in its history failed to adopt a platform for the election, choosing instead to adopt a “whatever Donald Trump says is our platform.”

The tragedy of this has been the  shocking actions of Donald Trump in his delusional claim that he overwhelmingly won the election which has somehow been illegally stolen in spite of no evidence to support this ridiculous claim. A gross example of this is his actions and words regarding the election in Georgia. Three recounts, including one meticulous recount by hand, revealed no evidence to support his claim that he won the vote in Georgia. An example of his dishonest and false claims is insisting on multiple occasions that millions of votes were counted after the polls closed and were “fake.” Multiple unsuccessful lawsuits over the election were dismissed for lack of evidence. Blatant attempts to pressure unjustified ands illegal actions by others to somehow set aside the vote of the people were commonly used. Probably the worst known example is the secretly recorded phone conversation to the Secretary of State in Georgia. Trump pressured him to take illegal action to “find” votes for him to show he won.

The outrageous conduct and actions by this president ending with encouraging a mob of supporters to march on the capital building has exposed this country to ridicule and shock by the other nations of the world and irreparably damaged the constitutional framework of the nation. He has caused this country a world wide loss of reputation and ability to work with other nations for our benefit. Those who condone the dishonesty and immoral conduct of this president in this connection should reflect on how important it is to restore our nation to a republic and  rejecting the idea of a monarchy or dictatorship for the United States.