My father was Paul Luvera Sr.,and my grandfather was Paolo Nicola Luvera. Nonno Paolo died July 4, 1956. Paolo Nicola came from a family of sheepherders and sharecroppers in Gallina Italy. He worked

with his father until he was 16 years old when he decided to move to Reggio Calabria where a Cousin Antonio working in a slaughterhouse. He was able to get a job with his cousin and lived with his family for four years. Then he married woman Caterina, from his village. They had a girl Rosina and a boy Salvatore.

After a few years of marriage his wife, Caterina, died. Later he remarried Philippa Latella who became a stepmother to his two children  a six-year-old daughter and a four-year-old son and she was a 24-year-old bride. He and Philippa had a boy Consoletto born in 1896 and dad, Paul Luvera born in 1898. She later gave birth to twin boys who died in infancy and then twin girls, and Antoietta & a girl, Caterina who died at age seven.

Eventually Nonno Paolo managed to earn and obtain enough money to immigrate to Canada where he found work with the Canadian Pacific Railroad working on installing and maintaining train tracks. After saving enough money he returned to Italy to spend a short time. When he left again for Canada, he took Salvatore with him. They found work in the coal mines of Coleman in Alberta. The two of them worked until they had enough money to send for the rest of the family. Nonna Philippa, dad. and the remaining children made their way to Canada and across the country to Alberta while speaking no English.

After a time, Salvatore decided to go out on his own. When Nonno Paolo developed coal mines lung disease, they needed to move to a different climate. Salvatore had moved on to Skagit County in Washington state. He wrote them urging them to come to where he was living. He told them he was an officer in the army. That made Nonno very proud of his son who was an army officer. It wasn’t until they arrived that they learned the army Salvatore was 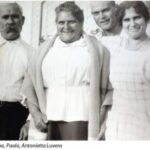 referring to wasn’t the U.S, army, but rather the Salvation Army!

When I opened my law firm in Mt Vernon, I had framed and hung in the waiting room Skagit County old pioneer photos along with other family photos. One in the waiting room was an enlarged picture of a man standing in Mount Vernon with snow piled very high in the street. The picture had been labeled “The big snow of 1916.” It had been on display in the waiting room for several years when one time when dad was visiting, he was in the waiting room. He saw the photo and inspected it. When we met, he excitedly told me that the man in the picture was his brother Salvatore in his Salvation Uniform. It had been hanging there all that time without my realizing it.