Texas, the “go it alone” state, has had a lesson about not regulating vital public industries like electrical service provided to a state or community. Texas rejected federal electricity regulations and a shared high-voltage connection with neighboring states. Republican political leaders in Texas have prized the states “self-reliance”, and it’s” go it alone” ideas and it’s cheap power. They brag about the states deregulation of the grid for bringing inexpensive electricity to the states resident and businesses. Rick Perry, former Texas governor, had argued that being without electricity “for a few days” is worth it because it keeps “the federal government out of their business.” Instead the Texas government created the Electric Reliability Council of Texas (ERCOTT) to oversee the distribution of electricity around the state and removed regulations.  As a result of its go it alone position among the states, when the bitterly cold weather arrived, there were scattered power outages in all of the states affected. Only in Texas were millions of residents faced with a prolonged, dark and unheated world with staggering electric bills. 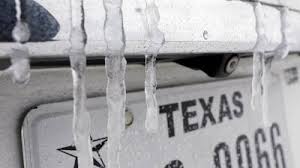 The most recent reason for Texas self-inflicted problem began in 1999 with a bill signed by then Texas Governor  George W. Bush imposing aggressive deregulation of all electricity sectors. The result was lower prices by charging wholesale rates for electricity. These wholesale costs were about half of the rest of the country because regulated electrical industries included in their rates money for crises like this cold snap and it’s rates were regulated by the states. The regulated electrical industries in other states were able to draw on power from the rest of the country in an emergency. But, not Texas since it decided to be a go it alone state. The problem is that when demand rises and the reserve power supplies are used up, Texas has to cut off customers to keep the system from crashing. In addition, since prices to customers are based upon the cost to the Texas system, customer prices skyrocketed. Wholesale electricity went up some 10,000 percent. That cost was directly assessed to customers in unregulated Texas. Consequently, some Texans got electric bills up to $17,000.

The February 21 Washington Post published an article about this fact. It turns out that  ERCOTT was unprepared for the extreme cold and how much power it was going to use during this period of the winter storm. When the wholesale price of electricity spiked up astronomically customers paid the price.  The  Texas unregulated electricity market allows customers to pick their own utility providers including those who charge wholesale prices for power. However,  that means that when the wholesale price increases, the plan becomes a financial burden. According to the article one customer observed that: “everyone in Texas is about deregulation.” However the customer, who has a $3000 electric bill, says “this just goes to show why regulation is important because, sure, in the short run it’s great, but then situations like this arise, where it just gets out of control”

The current Republican governor, Greg Abbott, acting as if the fact there was a deregulated electrical industry in Texas was a total surprise to him, said “it is unacceptable for Texans who suffered through days in the freezing cold without electricity or heat to now be hit with skyrocketing energy costs.” The “independent” Texans, who want nothing to do with the federal government, are now looking to the federal government for federal assistance. Residents who previously enjoyed the reduced rates of their wholesale prices are now scrambling to find a new fixed rate plan. However, as one resident found out, even though they used less energy during this period than they did the previous month,  their bill, usually $100 a month, was more than $6500 for 17 days.

In addition, it turns out that the unregulated industry and its management through ERCOTT were well aware of the problems associated with severe cold and demands on the power supply. Promised steps to prevent this kind of catastrophe were never undertaken. Without overseeing regulation nothing was done about it. Historically it should come as no surprise to the people of Texas and their Republican leaders that you cannot count on corporations, whose purpose it is to make money, can be counted on to take the appropriate steps to do the right thing if it involves spending money or making money.

I wonder what the Texan Republican leaders and their supporters think now of deregulation of essential industries? The Italians have a phrase for getting what you deserve: “Hai voluto la biciletta? Adesso pedala” which translates to “You wanted the bicycle? Now pedal!”