Matt brown was a childhood friend in Anacortes where we both lived only a few blocks apart. He was born in 1934 and died this month. Matt was born in Montana and was seven years 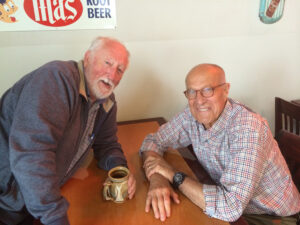 old when his father Ed, bought a lumber company in Anacortes, The Brown Lumber Company. They moved to Anacortes to a large home on 8th street. His mother Alice and Ed had two other children, Charlotte and Barbara. Charlotte married Ed Breckenridge who was a star athlete at Anacortes.  Matt graduated from Anacortes High School and married my classmate Kathleen Heilman in 1955. Her family lived at Pass Lake where they rented fishing boats and did selective logging.

His parents were good people. Alice taught Matt and I the Latin responses we needed to know to be altar boys at the local parish. His father later employed me in the summers at the lumber yard, I think as an act of favor, given my work skills. Their house was a place for neighborhood children to gather.  His father had poured a cement slab with a basketball hoop in the backyard. The basement had a pool table and other attractions.  The neighborhood children were often there playing or in the vacant field a few blocks from their home.

Another neighbor, Pat Malloy I and a friend, Dan Marsh spent time together time with Matt. We were friends through grade school and high school. We did a lot of together and sometimes got into trouble together.  Matt acquired a “hot rod” remodeled Model T car which Dan Marsh and I rode with him to different places around town and to Cranberry Lake  or to visit Kathleen at Pass Lake. When we were in high school, his parents allowed Matt to drive to California to bring Charlotte back when her college year ended. I went with him.

As long as I can remember Matt was interested in photography. In fact,  Matt and Dan built a darkroom in the basement of the house for Matt. As a young man  he worked with Wallie Funk at the Anacortes American newspaper in photography.  After graduation Matt attended Carroll College in Montana and later Seattle University.  He worked for his father in the Summer. Later, Matt began 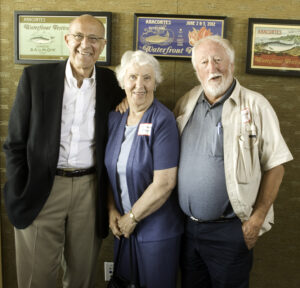 working at the Ford dealership in Oak Harbor after his father sold the lumber company in 1964,

Matt began to concentrate on photography as a career after the death of his son Martin with leukemia at age nine. He and Kathleen had six children. He became a  full time professional photographer who shot predominately slides, both 35mm but also 4×5 as well. He and Kathleen managed the business. Kathleen was a gifted photographer as well. After Matt became allergic to photographic chemicals he began to shoot digital photographs. Even after retirement he remained a photographer until his death this month.

Matt was a skilled photographer. I have three of his photographs hanging at my home. One of them is framed in pieces of lumber from the Anacortes high school gym basketball floor when it was replaced.  Matt was a wonderful childhood friend who became a very talented photographer. His parents were very good to me and was a home where I spent a lot of time as a child. Matt will be missed.