In 1960 the black and white film Never on Sunday
was issued staring Melina Mercouri as a Greek prostitute who refused to work on
Sunday. She later married the director who was blacklisted during the McCarthy
era. The daughter of the mayor of Athens, she was expelled from Greece during
the period of the Greek military junta. Later she was elected to Parliament and
became cultural minister of Greece during the 1980’s. She died in 1994. So, why
am I telling you? Because today is Sunday and none of the boats are in
front of our room fishing today. Apparently never on Sunday for the fisherman
too. 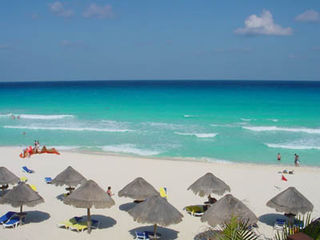 In our travels we find the world is truly a small
place because of our rather frequent surprise  encounters with people we know or who know
our friends. I think Malcom Gladwell wrote about this in one of his books Blink
or The Tipping Point. Yesterday, Lita ran into our Seattle attorney friends Ron
and Janice Perey who are staying in this resort too. We had lunch together and
enjoyed talking to them.

Sam showed up today. At least that’s what I’ve named
the Seagull who appeared this morning and stood at the edge of the small dip
pool looking sideways at us, with one eye, wondering if there was any food for
him. Lita made the mistake of feeding Sam. I chased him off when he became brazen
enough to go for a swim in the pool. However, he was only temporarily gone and
soon returned with three friends. I managed to drive them off as well.

Last night we sat in the main bar where a group
played music that sounded a little like Enya. Sort of other world new age
stuff. While it was a lot more mellow then disco it still doesn’t fit my image of the
Mexican bar and outside view. At least not for me. We ate sushi at the
Japanese bar restaurant last night. It was good, but not as good as Seattle
Belltown sushi places.

I haven’t spent much time away from the patio at
our room, but it looks to me as if the resort is mostly empty. There appear to
be more employees than guests here. I suppose these resorts suffer like every
other business during these times. When Gerry Spence and I were on our photo
trip earlier this month the dollar and Peso were equal. Now the Peso is $.75 to
the dollar. However, that doesn’t seem to have impacted prices as they remain New
York high at this resort.

We leave for Scottsdale tomorrow where we meet the children
and grandchildren over Thanksgiving. Eight children and eighteen grandchildren
means we should qualify for group rates at the hotel where we put them up and
that I’ll need another vacation after this get together.