This is the story of the maiden voyage of a warship designed by a king and built to his specifications, so what could go wrong?

Construction of the warship Vasa began in Sweden in 1626. King Gustafus Adolphus wanted a large war ship with great fire power. It was a huge ship 226 feet (69 meters) long and 38 feet wide. It stood 172 feet high. There were ten sails and was intended for a crew of 145 sailors plus 300 soldiers. At the time Sweden was in a war with Poland and the King wanted a strong naval presence in the Baltic. She was one of five ships that were to make up the backbone of the Swedish navy.

Around this time Sweden had lost ten ships in a single storm so the King was anxious to launch this ship. He gave the boat builder all of the measurements he wanted for his ship. But, later he sent the 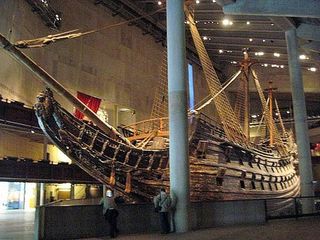 boat builder new measurements. However,the timber had already been cut. In spite of the boat builders concerns the king ordered that the measurements be followed. It’s speculated that the ship was lengthened in some manner.

The king ordered sixty four guns installed including seventy two 24 A pound cannons 24 pounds each be installed, but this was too many to fit on one deck so a second gun deck was added. The ship also could fire a combined cannon ball broadside of 588 pounds which was the largest ship broadside capacity to date. The ship was fitted with cannons of various sizes and were crammed into a ship that was, by comparison to the cannon weight, small.

The interior of the ship was decorated with sculptures and exterior sculptures that were extensive enough to add to the weight of the ship. These were painted in bright colors. There was a ten foot long figurehead lion and some 500 other sculptures as well. A team of six sculptures worked for two years with assistance of apprentices.

The hull was divided with three decks and a bottom compartment for ballast. The upper hull was built of thick wale planks which were very heavy. There were 120 tons of ballast stones, but the total weight of the ship was some 1200 tons.

In 1628 after the hull was launched and interior construction began, the captain in charge of construction ordered a test in which thirty men ran from one side to the other of the ship to check stability. After only three trips the test was stopped out of fear the boat would capsize. The king  was  not present forthe test, but kept a steady stream of messages to the builder insisting the ship be completed as soon as possible.

On Sunday, August 10, 1628 the ship made it’s maiden voyage even though the king was in Prussia at the time. The ship was fully rigged, ballast, guns and ammunition in place. Over a hundred crewman were on board along with some women and children who were guests. Most of the people in the area turned out to watch. For the first few hundred meters (100 meters = 328 feet) the ship was pulled along with cables from the shore. When they reached a point where the wind would fill the sails, the crew climbed the rigging to set four of the ten sails. The cannons fired a salute, but before the sails could be filled with wind the ship heeled over to the port side, then heeled again even farther. Water rushed in through the open gun ports and the ship quickly sank. It had sailed about 8/10's of a mile. One hundred and fifty people were drowned.

Captain Soofring Hansson who survived the sinking was immediately put in prison and a hearing ordered by the king. At the inquest every survivor and the workers as well as the people in charge of construction were questioned. It was determined the ships lack of stability was due to the underwater hull being too small and the failure to have enough weight in ballast in contrast to the upper weight of the ship. In the end no guilty party was found because everything had been done was ordered by King Gustafus Adolphus. He determined all the measurements as well as ordering all the heavy cannons. He also approved all the construction. It was an enormous economic loss as well as a military loss.

Attempts to raise the ship after the sinking were unsuccessful. It lay on the bottom until 1961 when some three hundred plus years later the ship was raised. A portion of the ship with artifacts and a scale model are in a museum. The Vasa Museum is in Stockholm and part of the national maritime museums.

Well, there you are. A true story of royal arrogance and incompetency combined with people who were afraid to speak out against authority. A lot of morals can be drawn about this, but I leave those up to you.