William Tatem Tilton, known as “Big Bill” is considered one of the greatest tennis players of all time.  Born into wealth he dominated the world of tennis in the 1920’s. He was the world’s number one player for seven years. He won fourteen majors including ten Grand Slams and four Pro Slams.  During his eighteen year amateur period of 1912-1930 he won 138 of 192 tournaments. His winning record was 93.6 percent.

William “Little Bill” Johnston was born in San Francisco and was also an American tennis champ.   He won the U.S… Championships in 1915 & 1922 plus Wimbledon in 1923.

In 1919 at the men’s singles championship “Little Bill” beat “Big Bill” in an upset win. Tilton realized that 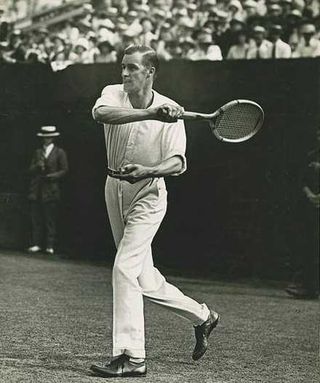 he could not beat Johnston until he found an answer to Johnston’s powerful forehand drive.  Tilton probably spent more time analyzing the game than anyone before or since.  In fact, he wrote several books about tennis one of which is still in print and considered a definitive work. Tilton was the master of strategy and tactics. So, after the defeat Tilton went home to analyze Johnston’s game and develop a backhand to match it. All winter he worked on his response to Johnston’s game. Starting in 1920 Tilton beat Johnston in five sets in the U.S. Championship and never lost another important match to him.  However, playing together they won seven consecutive Davis Cup trophies a record that still stands today.

Although born into money and having earned large amounts of money, Tilton died penniless. He spent his money lavishly. He kept a suite at the Algonquin Hotel. He backed Broadway shows that he wrote and he spent his money easily.  In 1953, at age 60, he was preparing to leave for a tournament when he fell dead of a stroke. He was inducted into the International Tennis Hall of Fame in 1959.

Tilton’s huge natural talent was supplemented by a willingness to work hard and be determined to achieve his goals. An important lesson for us all.