We are back from Africa and it is good to be home. We left Seattle on Tuesday May 14th and returned to Seattle Sunday May 26th.

From Seattle to Dubai is 7403 miles and the flight takes 18 hours. After spending a couple of nights there we went on to Cape Town South Africa. It is another 4752 miles and it takes 9.5 hours to get 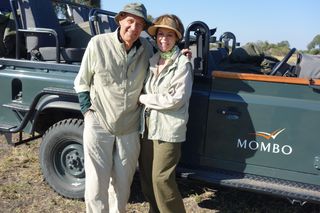 there. After spending several nights in Cape Town, we flew to Johannesburg which is about a 2 hour flight. Our connecting flight was to Maun Botwswana another 2 hour flight. In Maun we took a small commuter to the Okavango Delta where Mombo Camp is located, a 45 minute flight where we began our safari adventure.

After three days we took a small 4 passenger Cessena flight for 20 minutes to Jao Camp where we spent three days before taking the return route home. That was the real challenge – the flight home. We reversed the route, but without stopping except to make our next connection. We  are talking about over thirty one hours of flying. We are still recovering from that.


As I said in a previous post, we were blessed with free frequent flier first class tickets on Emirates Air going from Seattle to Dubai and Dubai to Cape Town plus the return. What an experience! These are suites with doors that close for privacy. You are provided a very high quality pajama, slippers and various aromatherapy products plus a toilet kit. There is an elaborate menu from which you can order

anything at any time. There is a mini bar in each suite. The large TV in the suite offers new release movies, music, news and TV programs. The flight attendant are attentive and the seat folds totally flat, extending 6'5" in length with a mattress and duvet. It just doesn't get any better.

Dubai was notable for me in two respects. The first was the extraordinary modern buildings and expenditure of huge amounts of money. The second was the smog that blacked out the sky and was worse that Los Angeles. The office buildings are all unique in their design and brand new. They have filled in the ocean to create a huge area for homes and other buildings in the shape of a gigantic palm

shape. They have created an equally large area near it in the shape of each continent of the world.

Arranging lunch on the 24th floor of the Burj Al Arab hotel was an experience. They wanted our credit
card number plus all kinds of information before we could make a reservation and without a reservation we couldn't get past the guarded gate. Inside was a enormus lobby with fountains. Our view from the 24th floor was expansive. We had decided not to stay in the huge hotels here, but rather at the smaller more private One and Only Hotel in Dubai. Around town are beautifully designed skyscrapers. The  Burj Khalifa is the tallest building in the world at 168 floors, the top of which disappears into the smog. Multiple huge shopping malls and market areas are also here. We visited markets and toured, but were happy to move on to Cape Town.

The Emirates lounge at the airport in Dubai is huge with multiple stations for food and drink along with showers, spa and other free services. An impressive place. The Dubai airport is an incredible retail center that resembles an upscale mall. While I didn't buy anything I was interested in finding gold cover 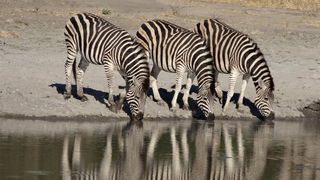 In Cape Town we again stayed at the One and Only hotel. Our unique experience was that the hotel was full from a convention and there was a problem with our room so they upgraded us to the Presidential Suite at no additional cost. The only suite like it in the holtel as an enormous suite with a large living
room, a separate dining room, office, full exercise room, full kitchen and bar as well as a large master bed room. The view from the top of the hotel at our suite was from the large balcony facing famous Table Mountain. Whatever the cost of this room we only paid normal rate. What a treat.

We enjoy Cape Town. This was our third or fourth visit. We took a car trip tour around the area and visited the penguin's that live on the beach. We enjoyed seeing the various parts of town and the area. The temperature was great and the sky was blue.

Other good things that happened to us involved our companions in the Safari vehicle at Mombo Camp. John and Jill Farnham were traveling with their son James and his girl friend Tessa. We were all in the same vehicle each time we went out and spent our time with them. They were delightful people we totally enjoyed. We didn’t realize it at the time, but John was a teen pop Idol in Australia and went on to become one of the country’s best known performers with a career spanning 40 years. He is the only Australian artist to have a number one record in five consecutive decades. He has had the highest 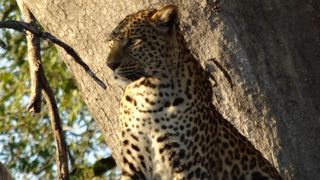 selling album in Australian history. He is famous in Australia and all we knew him as was a really down to earth nice guy with a friendly wife. It wasn't until I check the internet at home I realized who he was.

We also had one of the best guides in the area at Mumbo camp.  We were fortunate enough to see not only giraffes, lions, elephants, zebra's and the animals you would expect, but some animals not often seen. We saw a honey badger, mongoose, a wild African dog, and leopards mating and a team of female lions hunting. One gets up at 6:00 am in the dark and eats a light breakfast followed by a tour in a Land Rover with the companions. A mid morning tea break and later a lunch. There is an afternoon break and then another tour that lasts until dark. It was a great experience.

At this camp and our next camp there was one night where the people of Botswana, who worked at the 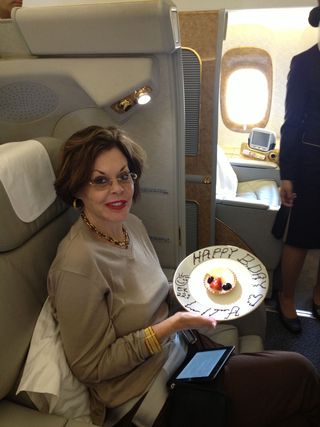 camp, put on a special performance of dancing and music. In the evening there was a large camp fire and an outside dinner. A large group of thirty or more people sang, played drums and danced. One
notable dancer was a bushman was in his mid 70's and who was in great physical shape. I was told he helped build the camp and works "when he wants" but ofter wonders off into the bush to explore, fish or hunt.

From there we took a small plane to our next camp Jao which is located on an island. Much of the roads on this island are under water and the Land Rover is equipped to drive through the water on roads created by Hippos. The first afternoon was hot and few animals, but many birds. Our next tour, the following day, began with a 1 hour trip by boat to another area where we transferred into Land Rovers for a land tour. Here the animals were numerous, but not as numerous as Camp Mumbo. It turned out that this camp had the highest rated spa however in Botswana and Lita confirmed this was true. She became friends with "Phil" who was the woman who ran it. This camp was not our favorite as it has two levels which are reached by
either stairs or a long ramp.

Lita celebrated her birthday on the Emirates flight back to Seattle. Before we left the Dubai airport, one

of the pilots stopped to talk to us as we were the only people in first class. He turned out to be from Eugene, Oregon but was living in Dubai. He was planning to go on to Eugene for his mother's birthday and I told him it was Lita's birthday. Later in the flight attendants brought her a small cake with happy birthday written in chocolate. We celebrated her birthday at 30,000 feet plus somewhere over the ocean. It was long, but pleasant flight home.

We had other really unique things happen as well. Twice we had a problem at immigration or  security due to long lines. The first time was when we were connecting on our way to Safari. An official who was monitoring the line looked at our tickets and said we couldn't make the flight by staying in the line so he led us through line personally to where we had to go. Without him we would not have made

our connecting flight. The second time was on the way home and our travel representative who met us arranged with an official person to take us through the diplomatic line avoiding all of the time and effort it would have taken.

In addition, we had left part of our luggage with the safari travel company in Johannesburg. When we picked up our luggage I needed to get inside the locked carryon for our return. However, the  ombination lock on my suitcase wouldn't open. I tried everything. Fortunately, the same person who took us through the diplomatic line took us a luggage store at the airport where the store owner was able to open  it for me saving me from a real problem. This was typical of all the good things that happened on this trip.

All in all, it was a great experience. It is a very long way to go, but even though this was our fourth safari I am ready to do it again. Whether my old body is willing or not is another issues.

We are happy to be home.