I watched the movie The Two Popes and enjoyed it very much. I also recognized that much of the dialogue was accurate and the script had taken liberty with how to present the viewpoints of the two men. In the interest of historical accuracy I decided to write this review. If you haven't seen the film you should. You'll like it. Great acting and scenes of the Vatican.

My personal view of  the movie is that it was extremely well acted, with great views of the Vatican and highly entertaining. I was amazed how closely Anthony Hopkins and Jonathan Pryce resembled the popes they were portraying.

As to its historical accuracy,  it turns out the movie does not show the true facts. To begin with,  there was no meeting between the two men in Rome, nor any conversations at the Vatican, nor any mutual confessions nor did they develop a personal friendship and they certainly did not eat pizza together. As to 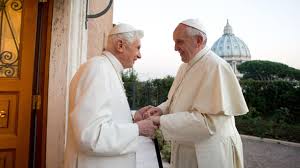 Pope Francis (Bergoglio), it turns out that the portrayal of his engagement to a girlfriend never happened. He planned on becoming a priest as a child. It is not true, as the movie shows, he actively opposed becoming pope. Instead he had made a speech to inform the voters ahead of voting about the policies he would follow if named pope. The policies included acceptance of LGBTQ communities, close collaboration with other religions, admission of divorced and remarried to the Eucharist, a willingness to discuss women deacons and married priests, concern for poverty and the significance of harm against the environment and other issues as being as important as sex issues.

Francis was born in Buenos Aires in 1936 the son of immigrants from Italy. He entered the Jesuit novitiate and had 15 years of training for the priesthood. The film is accurate regarding the situation in Argentina during the 1970s when the military government took over. He was head of the Jesuits and he has been criticized for not speaking out more and resisting. However, it turns out that he had been helping people in secret. It is true he was removed from leadership responsibilities and sent to central Argentina. Thereafter, he rose I leadership and developed more liberal attitudes about poverty and inequality. He also was known for an unconventional living style by traveling by public transport, living simply and cooking for himself.

Ratzinger (Pope Benedict) was ordained in Germany in 1951. He spoke several languages and was an accomplished pianist. He was a theology professor whose original views were liberal and progressive. However, when there was a student revolt in 1968, he came to believe that rejection of authority leads to chaos and that liberal ideas in the church would result in religious decline. He became an ultra-conservative theologian.

The reason Pope Benedict gave when he resigned was not, as the movie says, was to give Francis an opportunity to advance his progressive ideas. Benedict said it was due to his age and the inability to meet the physical demands of being Pope. It’s been suggested that the real reason was he was unable to cope with the enormous church problems involving the Vatican bank and clergy sex abuse and the Church scandals of the time. At the time of his unexpected announcement a Vatican secretary had leaked confidential documents exposing internal Vatican power struggles and scandals. He was 85 years old at the
time, the fourth oldest pope in history.

It is true that when Pope Francis appeared on the Vatican balcony after his election, he was wearing just a white cassock. He had declined to wear the traditional scarlet ermine trimmed Cape. All he said to the crowd was “Buena Sera” and asked the people to pray for him. After that he went to the nearby hotel where he had been staying to collect his bags and pay the bill. As the movie suggests he lived as a simple and ordinary person.

The history of Pope John Paul and Pope Benedict

The history of the present Church situation begins with Pope John Paul II. He was an ultraconservative who believed that Vatican II policies were undermining the church. He was opposed to divorce, birth control, abortion, Eucharist for divorced and remarried people he saw as living in adultery, and was even opposed to allowing discussion of married priests.

John Paul was Pope for 26 years. He was widely seen as refusing to keep pace with the changes in the modern world. He was obsessed with protecting what he called “truths of the faith.” During his papacy dissenting theologians were disciplined, bishops who resisted were replaced and he did what he could to shut off debate on dissenting views. He was opposed to the use of condoms in fighting AIDS and saw birth control as a sin. He advocated abstinence is the best way to prevent the spread of AIDS. During his long reign he appointed bishops and cardinals who agreed with his ultra-conservative theological views.

In 1981 John Paul appointed Ratzinger (Pope Benedict) to the powerful position as head of the Congregation for the Doctrine of Faith. This is the agency of the church which conducted the Inquisition and enforces Church doctrine. He became the pope’s enforcer. He and John Paul tried to reverse the policies of Vatican II even though Benedict had previously been in favor of them. It was his role to stifle all dissent and theological inquiry of any dissenting views. Ratzinger shaped the agency into a powerful weapon against dissent. He earned a reputation as a hard liner who suppressed liberal theologians and insisted on the superiority of the Catholic faith for salvation over any other religion. He was a Vatican watchdog. It was Ratzinger who demoted Archbishop Hunthausen of Seattle for being too liberal.

Not only did Benedict continue John Paul’s policies of stifling dissent and discussion of policies except traditional views, but 10 years ago while Pope, he granted permission for the clergy to conduct the 1962 format Mass and granted bishops the right to allow Latin mass to be offered. That greatly encouraged conservatives who were opposed to the policies of Vatican II and who returned to the Latin Mass.

During Benedict’s eight-year papacy, leaked documents exposed long standing Vatican financial corruption, blackmail and money laundering schemes which originated under John Paul and continuing into Benedict’s papacy. John Paul had refused to believe the sex abuse allegations about his friend Cardinal Macial and it was Benedict who on becoming pope moved quickly to discipline and remove him for his scandalous conduct. News of a Vatican sex ring came to light and he was faced with multiple scandals in and outside the Vatican. In fact, a 2012 publication of letters and memos exposed the Vatican as a place of envy, scheming and political infighting. There were details of the Pope’s personal finances, attempted bribes for private audiences with the pope and exposure of sexual abuse. In 2013 the central bank of Italy suspended all bank payments inside Vatican City over allegations of the Vatican bank’s  failure to follow anti-money laundering regulations. The extravagance of some of the Cardinals was scandalous. $500,000 was diverted from a Vatican owned Children’s Hospital to renovate a Cardinals apartment in the Vatican. A $2.2 million mansion that an American archbishop built for himself in Atlanta and $43 million in church funds spent by a German bishop to renovate his mansion. Because of all these scandals Benedict had commissioned a report by three trusted cardinals. When he received it and learned of these things  his resignation followed two months later.

That was the situation when Bergoglio became pope in 2013. Francis began to clean up the Vatican’s finances making the bank accountable. He implemented reforms in Vatican bureaucracy and shutdown whole departments. He demanded resignations and removed others.  In a 2017 address to the top members of the Vatican he accused them of creating “cliques and plots” and suffering from an internal cancer. He was quoted as saying reforming the Vatican is like cleaning the Sphinx of Egypt with a toothbrush. These actions caused a great deal of controversy among those involved and among the conservatives.

Conflict Between Benedict and Francis

When he resigned, Benedict refurbished a convent he moved into within the Vatican only a few hundred feet from where Frances resides. This in spite of the fact that when he retired he had indicated he would disappear from public sight and talks, clearing the way for his successor to clean house in the Vatican. However, instead of leaving, Benedict decided to stay at the Vatican and retain the title “His holiness.” He continued to wear the cross of the Bishop of Rome, continued to write, meet Cardinals and stay involved. At first, he remained behind the scenes with an exterior cordial relationship with Francis. His very presence provided encouragement to conservative critics of Francis’s reign. Soon, there were increasing reports of Benedict’s private objections about Francis over issues of morality, theology and sexual abuse issues. Benedict was quoted as saying about Francis: “He’s soft on homosexuals, the lesbians and the transsexuals. And how dare he criticize the Curia? He accused the Curia of spiritual Alzheimer’s just because his own papacy is unraveling.” He objected privately to Francis giving the Cardinals a “tongue lashing” about their “serious disease of gossip” and objected to his criticism of the Curia for its internal politics. Conservative cardinals and bishops both in the Vatican, in the United States and elsewhere agreed with Benedict about Francis. Archbishop Vigano in Washington DC issued a public letter accusing Francis of not dealing with sexual abuse, doing a poor job and calling on him to resign. Other conservative Bishops attacked Francis and his role as Pope. joining Vigano and other critics.

Pope John Paul's two decade long campaign to impose ultraconservative policies which were enforced by Pope Benedict resulted in the bishops and cardinals who are ultraconservative and opposed Francis. John Paul and Benedict were vehemently opposed to the reforms of the second Vatican Council. Their goal was to return to the traditional church and to oppose any other views.

In April 2019, even though Benedict had resigned and vowed to remain silent in the background, Benedict wrote a 6000-word letter which was intentionally made public. In it he blamed the sex abuse crises on a permissive culture from the 1960's and progressive theological ideas that were now being advanced in the church. The letter publicly undercut Francis and his public teaching on the issues. It greatly encouraged Francis’s critics to attack him again. This significant difference of viewpoints between two living popes has resulted in confusion among the church causing people to choose sides. The conflict between the viewpoints of two men has significantly aggravated unity of not just the Vatican but the entire Church

There has been an overall campaign against Francis by the conservatives in the church who want to retreat to the traditional church as it was before Vatican II which took place over 50 years ago. The traditionalists take every opportunity to attack Francis. They have a deliberate strategy with an eye on the election of a new pope who will revert to conservative policies and teachings.

Unlike the movie, the two men did not become friends and did not begin to accept the conflicting views. Benedict's continued presence and public involvement in Church affairs only exacerbates the conflict and controversy. Bishops and cardinals whose view points are in agreement with Benedict and John Paul will continue to stir up controversy and inhibit needed examination of traditional positions of the Church so long as Benedict remains in the position he has assumed even though he resigned. A great deal of harm is done when the biased propaganda of the ultraconservatives is spread in a deliberate attempt to undermine Pope Francis. The only objective way to view the attacks on Francis is to do so as one would with political differences of opinion. There is a lot of "fake news" and deliberate false accusations as well.