My father in law, Hollis Barnett died on March 22nd, 1990. He was a unique and wonderful man. You can read about his extraordinary wife Betty Barnett and more about this couple who I grew to love. https://paulluverajournalonline.com/weblog/2010/03/i-write-this-in-memory-of-my-wifes-father-hollis-hall-barnett-whodied-in-puyallup-washington-on-march-22-1990-at-the-a.html 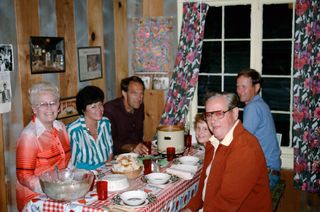 Hollis had grown up in the park. and had worked as a temporary ranger in the park while growing up. After high school he went to Spokane to attend Gonzaga University. Hollis met his future wife Betty there when she as a senior at Holy Names High School and he was attending Gonzaga University. At the time he was staying in a boarding house run by Betty’s aunt and they married November 16, 1931 in Seattle where he had found work operating a gas station to support them. Then, in 1937, Hollis was offered the operation of a small gas station located at Longmire inside Mount Rainier National Park, so they moved there and lived in a small room above the station.

While working at the gas station in 1937 Hollis learned that land owned by the Park Commissioner Edward Hall was for sale. He decided to buy property located right at the entrance to the park as an ideal location for a resort, gas station and restaurant. The result was the first Gateway Inn featuring handmade log cabins for guests. They lived in a small room in the back and the log cabins were added later to rent to travelers. Their son Devitt was born in 1933, followed by young Hollis in 1939 and then Barbara in 1940. With a growing family began to build a small house next to the restaurant in 1941. Monica was born in 1943 and Lita in 1950. This was a family run resort that served food, sold gas and provided small log cabins for overnight guests. They also rented ski equipment and had a small store inside as well. Everyone in the family worked at the resort.

Hollis had the ability to "talk to the animals." Not only animals, but ravens and birds would come out of the woods and fly from trees to come to him. He would talk to them in the noises they instinctively made. It probably also helped that he always had food in his pockets for them.  Herds of deer roamed the property and most of them Hollis had named. During hunting season, he would grab the males and saw off their antlers to look like a doe instead of a buck with a rack of horns. He would also attach red hats to his favorites so hunters couldn’t shoot them.

When I think of Lita's dad I think of him with a twinkle in his eyes. They would literally crinkle up and get a smile when he was about to tell a joke and he had hundreds of jokes he loved to tell. He had you ready to laugh before he even told the story or joke, and he was a wonderful story teller. He had a wonderful sense of humor and was fun to be with. He was one of those unique thoroughly decent human beings who loved nature and his fellow human beings. When Betty died Hollis was devastated and really never recovered from losing her. She was a very special woman and so was he. I miss them both and wish I could be half the decent and good human being Hollis Hall Barnett was during his life.

I remember that  March day like yesterday.  It was clear, chilly,  and windy, with white cumulous clouds just flying by in the sky over the Nisqually River.  I wondered, was one of them transporting his soul to Heaven, and thought, of Course. Mom was orchestrating that ride.   It had snowed the night before, at the higher elevation and the Saw Tooth Range had Snow on the tops. The Snow felt right and was comforting, like a blanket to keep him warm.

I was at Mt. Rainier with Patricia, and Paul was in Portland trying a  death case of a young student who died climbing Mt. Hood on a Student trip that was required for High School Graduation. Pat and I were going to drive down to Portland the following day.  She was going to visit Tracy and I was going to assist Paul with the  Trial .   I vividly remember the call  but   for the life of me, I don’t remember the messenger, just the shocking  news?  I stumbled out of our cabin, and was planning to go to the old house, but was compelled for some reason to stop at  the big Maple Tree between Hollis’s house and the old house and I  sat down and cried.  That is where Pat found me.   I felt blessed I was on the Sacred ground when I got the news and that Pat was with me.

Paul asked for a recess from Trial to attend the Funeral and the  Defense Lawyer objected that he was just seeking sympathy and the  Judge ruled the trial should go on and Paul never attended the funeral.  He has always regretted that.  As I am sure you can imagine.  That defense lawyer was never forgotten and  very much punished for years to come.  Lucky for him he was an Oregon lawyer, or he probably would have  quit practicing law.

I am saying a prayer for a Man whose eyes twinkled like the brightest stars in the sky.  Especially when he was about to deliver the punchline to a joke. Even  a joke he had told a zillion times before… and even if you had heard it a zillion times before, when you saw that smile. and the twinkle in  his eyes. ( Little Gram used to say they looked like 2 little huckleberries in a glass of milk)  You could not help but Laugh out loud and feel happy.

As we all know, he was Sentimental to a fault. He would cry at seeing people say goodbye at the airport he didn’t even know, and he bestowed that sentimental gene on me.  I remember him waking me up before dawn when we were in Sacramento Visiting Barb and Dave and  Damon and David.( Chalice wasn’t yet born).  He just couldn’t  say goodbye  to people he Loved  without falling apart, so  he  quietly packed Mom and me up and  we started driving home before the  Beninger family knew we had gone.  I don’t think he stopped crying until we reached the Oregon Border.

Rest in Peace Dad.  You were  loved by many.  Lita Luvera

I had a 3-day arbitration starting  in Seattle involving a large dispute with a franchise business scheduled for the next morning, with opposing counsel that had flown in from out of state. I had talked to Dad on the phone about 6 pm and he was with Melissa and seemed ok. After going to bed I was awakened with a call from Melissa in the middle of the night  that Dad was unconscious, and the fireman were on the way. When I got there the fireman were still working on Dad and I knelt beside him and prayed for him. The fireman couldn’t get Dad to respond but took him to Good Samaritan hospital  I drove to the hospital and sometime around 4 am the death was confirmed. I was by myself and not doing well when a janitor noticed me and took time to ask me if  I was okay. He asked me if I would like him to pray with me and I was grateful for his offer. After praying together, the janitor asked me not to tell anyone at the hospital as they were instructed not to get involved with hospital visitors or patients. I drove home and told Patty that dad had died and made calls to Barb, Monica and must have learned that you were at the mountain, as I asked Patty to call Pat Kennedy to let you know about Dad's death. l knew I couldn't handle the trial that day but called the associate that I had help me put together the brief and exhibits and met him at the office and prepared him for the first day of trial. I called my client who I had known quite well and represented for a number of years told him of Dad's death, and that the associate would handle the first day and I would be there the following 2 days. The trail was very critical to the client’s financial success and he couldn’t understand why I could not show up for the first day of trial. Along with this I made calls to Barbara and Monica but couldn't reach you but must have learned you were at the mountain as I asked Patty to call Pat Kennedy to let you know.  You may not have had phone service at the mountain at that time.          I have had to work at not letting my sympathetic emotions  show at times over the years, but  at times while reading a good book or watching an  exceptional movie I will involuntarily become teary eyed which I think must come from Dad's side.

Lita’s sister Monica says: .  I remember when I found out dad died, I had just got back from a trip to Reno.  Holly and Rich met us at elks lodge where the bus pulled in.  They didn't call us while on the trip as they knew we would be back the day after it happened.  So very sad but we all have to go through loss in our life and at our age we will be the ones going, leaving our love ones to remember and wipe away the tears. Time marches on!