What silence you say? I’m talking, of course, about the fact that Donald Trump, the ex-president of the United States, was permanently suspended by Twitter Inc from using his account @real DonaldTrump. He was indefinitely  suspended from using his Facebook and Instagam accounts as well.  Isn’t it wonderful? 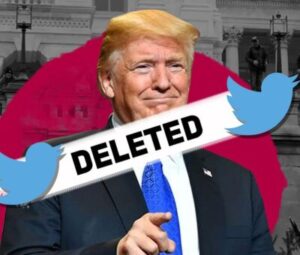 more than 12,000 tweets. The New York Times reported that his most prolific day came on June 05, 2020 when he sent 200 tweets or retweets, breaking a previous record of 142. We are talking about 5.7 times per day on average during the first half year at the White House. That grew to 34.8 times a day during the second half of 2020.

It’s probably healthy for him as well since he sent these when most people are sleeping. For example, in May of 2020 he tweeted more than 30 times before 9 a.m. after tweeting nearly twice that much Monday and hundreds of times over the weekend. He attacked Megyn Kelly at 3:53 am, made accusations against Ted Cruz at 1:58. In fact, he frequently sent messages between midnight and 4:00 am.

So, how many followers did he have? There were 88,776,124 followers and he sent a total 59,558 tweets to them before being permanently suspended.  And what do these tweets say? Things like this:

This is a man who lost the popular vote in the 2016 election by 2.9 million votes, but was put in office by the electoral college provision of the constitution. The man who again lost the popular vote in the 2020 election by over 7 million votes. He is also the president whose many failings include the use name calling like a school boy in grade school might use: Crooked Hillary- Little Rocket Man (Kim Jong Un) Low Energy Jeb (Jeb Bush)- Lyin’ Ted (Cruz)-Pocahontas (ElizabethWarren)- Little Marco (Rubio) just to name a few. It means no more tweets like “build a wall and Mexico will pay for it” or  “witch hunt” and all the claims of fraudulent election. That’s the person we are not getting late night tweets from any longer.

This means we can now get back to the real news that is important. This brings new meaning to the phrase “Silence is golden.”